Purism and GNOME design team member Tobias Bernard is back with a fresh batch of mockups for Phosh, a new mobile UI built using GNOME technologies.

Building on his previous set, Tobias has begin exploring how window tiling (i.e., the ways applications are arranged and managed) might work in Phosh when run on a bigger screen, like a tablet or external monitor connected to, oh I don’t know… Let’s say a Linux phone?

But what you can see here, in Tobias’s latest batch of mockups, is a thoughtful touch-led approach to window management, window arranging, and window interactions.

Heck, he’s even round enough room to posit some traditional quarter-tiling — an oft-requested feature that GNOME Shell proper still lacks!

To take a closer look at the mockups I recommend watching the following video by Alex, aka BabyWogue (which, spoiler alert, does not feature his trademark robot voice).

Alex’s clip provides you with more background on what it is you’re actually looking at, thereby giving you a better understanding of how things would function and flow in action/motion/reality:

Though some of the design approaches taken here do echo the new Chrome OS tablet UI (unintentionally or not) its nonetheless a solid and practical approach that doesn’t rely on gimmicks or hidden gestures.

Personally, the idea of being able to run a “proper” Linux OS on a mobile device that has a proper mobile-first layout — Unity, GNOME Shell, etc are not terrible on touchscreens but they lacks some of the fancy finger-based nuances found in iOS and Android — is something I’m pretty impatient for!

Admittedly Phosh still has a long way to come on the phone side (which won’t be limited to the Librem 5 as there is already a port for the PinePhone) — but it’s important that the future “converged” experience is rooted in the foundations of the mobile build.

Ubuntu’s mobile OS (later Unity 8) didn’t take this approach. There were several different mobile workflows, ideas and implementations (the early Ubuntu phone UI is different to the one that shipped), none of which quite “got it right”.

The constant UI and UX track changing meant that, by the time Ubuntu’s developers started to think about adding ‘converged’ features like zoo windowing, it all felt like an after-thought; “tacked on”; divorced from the handset experience rather than organically grown out of it.

So it’s fantastic to see Purism is not making the same mistakes. 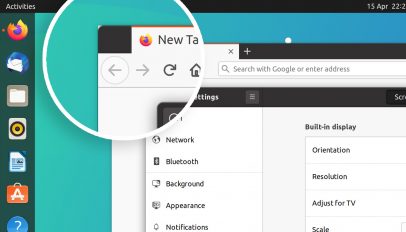