The upcoming release of Ubuntu 20.04 LTS makes it easier to enable fractional scaling support of the box thanks to a new system setting option.

While the ability to enable fractional scaling in Ubuntu isn’t new it is no longer a hidden option that only those with the right terminal commands can make use of.

Ubuntu 20.04 has a switch to enable fractional scaling in the Settings > Screen Display panel. There, scaling values between 100% and 200% (yup, including the 125% sweet spot) are available when the feature is turned on:

Fractional scaling support is not automatic in Ubuntu 20.04 (i.e. the system doesn’t detect the correct setting for you). It is also NOT turned on by default. If you want to use it you have to explicitly turn it on.

And though the distro makes it easier to enable fractional scaling the feature is still considered experimental. The toggle for it even cautions that use “may increase power usage, lower speed, or reduce display sharpness’.

But those with high-resolution displays (particularly 2K and 4K ones) will find that the additional values more useful than the standard 100% or 200% scaling options.

ON my device I find that the GNOME Shell interface, GTK apps, and other software ‘scale’ to better fit my display at 125%:

Heck, even Google Chrome doesn’t look too bad at 125%:

However — turns to camera — fractional scaling DID use more resources on my laptop than the standard 100% setting did.

I don’t know how best to “benchmark” the feature (a specialised area which isn’t this blogs forte 😛) so my test wasn’t terribly scientific. I opened Activity Monitor and waited for it to settle. I then switched between a few windows and opened a few menus, all at 100%. I then did the same at 125%.

While not huge, CPU load did increase across all cores for the same basic tasks when fractional scaling was active.

However, this setting, production ready or not, did need to ship, and ship now.

My hope is that the Ubuntu and wider open source development communities work to improve fractional scaling support going forward and that those changes (especially performance wise) get pushed out to 20.04 LTS users in future. 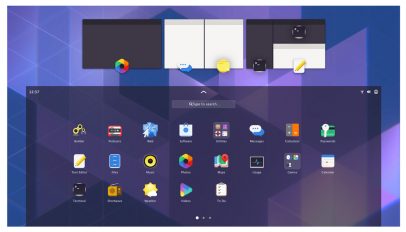