When you think of Linux powered things you think of super computers, space robots, and million dollar machinery — but it can also be squeezed down to run on the tiniest of tech too.

Such as? Such as the business card belonging to systems engineer George Hilliard. While his business card bears the usual contact details like his name, his email address, etc, it also boasts a treat: a USB port on the side.

Why a USB port? Because his business card happens to double up as a Linux-powered computer!

Or is it a Linux-powered computer that doubles up as a business card? Either way it’s both a pretty nerdy and a pretty neat way to showcase your technical skills in a flashy yet functional manner.

Plugging George’s business card into a computer allows the recipient to boot up a “super stripped-down Linux in about 6 seconds” — which is arguably less time than it takes the read the details printed out on it!

Just don’t expect a system that’s too capable from something as thin and nimble as this. George notes: “due to form factor and cost, the card lacks I/O, networking, and any amount of storage to run heavyweight programs.”

Put simply: you won’t be reading omg! ubuntu! from one.

But, interestingly, the card can also appear through USB as a traditional flash drive. It contains a README file, a copy of George’s CV (aka resume, if you’re US-based), and some photography. It also has a couple of games, a few utilities, and some free space should the recipient need/want to save something to the card.

Perhaps the most surprising element of this innovative personal-sell isn’t the format but the cost.

George says that each business card costs less than $3 to make.

I think sub-$3 is ridiculously reasonable price to pay for such a memorable and unique way to “introduce” yourself to prospective future employees and could-be clients — and when you’re networking for work you do want to stand out in peoples minds after all.

For the full story of how and why George decided to make a business card that runs Linux in the first place you can head on over to his blog and read his breezy yet technical zip through the salient details.

You’ll also find source code, schematics, and other relevant info on his site should you fancy following his lead and creating one of this card-sized computers for yourself! 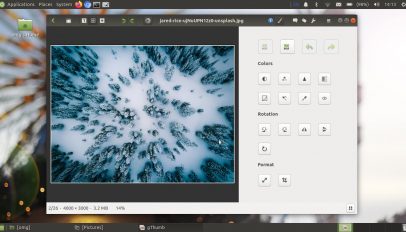 How to Install gThumb on Ubuntu 18.04 & Above
Read Next