With various different Linux app stores and formats around it be hard to find the app you want in the format you want, when you want it.

Seek a Snap? You check the Snapcraft.io/store; prefer Flatpak? You forage on Flathub; angling for an AppImage? You, er, hope you come across one in the /releases page on Github? 😅

It’s a rub many in the free software community have tried to solve (it’s also something of a paradox). I wrote about one such effort, the Linux app store website, back in May.

Although well received (and open source) the project vanished soon after, and the “Linux App Store” website is no longer online.

But the notion behind aggregating apps from different stores in different formats within one, single UI hasn’t gone away.

App Outlet is a new desktop Linux app that, like the Linux App Store website, lets you search, browse and install software distributed via the Snap store, Flatpak’s Flathub, and AppImage from one place.

And it doesn’t look too shabby, either (screenshots from the app website; i don’t rock a faux-OSX look):

There’s a search bar for finding packages by name or keyword, and an incredibly extensive set of categories that are probably too specific to be of use right now (this specific-ness would work better under broad groupings, such as “Games”, “Office”, “Utilities”, etc).

From a cursory play the tool seems to have zero issues finding an app listed on multiple stores.

App Outlet does not group similar results together under a single, unified listing. Instead, the tool returns a separate result for each app on a matching store. There is a filter bar to view results from a specific store only, but it defaults to showing results from “all”.

Interested in trying it out? You won’t be surprised to hear that it’s available in a variety of different formats, including a regular installer:

And it can be installed as a Snap app:

But Joey, I’ve Picked My Side Already!

Can App Outlet going to find much of an audience?

Anecdotally, based on fevered forum threads, terse Twitter comments, and irate Reddit rants, it kinda feels like a lot of Linux users have already picked a side in these so-called package wars, wedded to a specific format and now firmly anti whatever else.

Personally I’m kinda package agnostic; I tend to use whatever’s is available. PPA? Sure. Snap? Cool. Flatpak? Don’t mind. I leave the packaging decisions to the people doing the packaging: it’s their effort involved.

So long as I can install the app in some form and have it work, I’m genuinely not that bothered about how I get it.

It certainly helps that Ubuntu Software has a plugin to show Flathub wares alongside repo software and Snap packages. It’d be great if this could be expanded to pull in other formats too.

But that doesn’t seem to be the direction this is going. Ubuntu was, very recently, exploring a Snap-only software store intended to replace Ubuntu Software (we were asked to remove our post on it). This led to GNOME Software developers openly plotting to curtail Snap plugin support in response.

Should the wider community pillars retreat behind their “one true formats” it might be left to third party tools like App Outlet to bring everyone back together.

So, for a distro agnostic fool like me who cares more about the software than the wrapper it comes in, I hope this one manages to stick around. 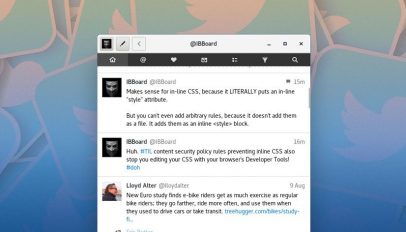 Cawbird is a GTK Twitter Client for Linux Desktops
Read Next