A new stable version of the Linux application launcher ULauncher is available to download.

Ulauncher made our list of the best app launchers for Ubuntu and other Linux distributions thanks to its lightning fast responsiveness and wide range of plugins.

Ulauncher 5.3.0 is the first stable release in the 5.x series and the first version to fully support Python 3.

Because of this vital foundational change Ulauncher 5.3.0 is not compatible with plugins built for the 4.x series (and the v1 API) — something you should keep in mind if you plan on upgrading from an older version of the app.

Thankfully, many of the most popular Ulauncher plugins have been ported over to use the new v2 API and work just as well as before. Do check the list prior to upgrading to make sure any add-ons you rely on for Ultimate Productivity™ are available.

Other changes in Ulauncher 5.3.0 include:

To upgrade to or install Ulauncher 5.3.0 on Ubuntu 18.04 LTS and above (as well as Ubuntu-based distros like Linux Mint) you need to add the official Ulauncher PPA to your Software Sources:

If you just want this release, without any future updates, you can download a standalone installer package from the Ulauncher website instead.

Arch users can find this release in the AUR. Fedora users can make use of the .rpm packages listed on the Ulauncher website.

Home » Apps » Ulauncher 5.3 Released, Here’s How to Install it on Ubuntu 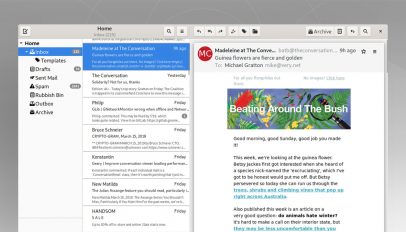