I’ve been in desperate need of a dedicated Linux laptop for a while so I’m pleased to say that — hurrah — I have one! 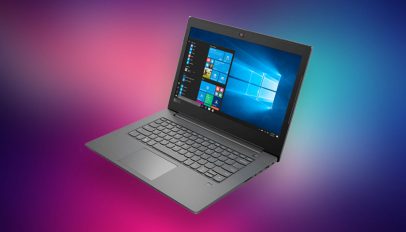 Until now I’ve been making do with a co-opted Acer Chromebook R11 as my go-to Linux portable.

While this Chromebook (running Linux) is great for travelling (and boasts a great screen) let’s just say the modern Ubuntu desktop isn’t a comfortable fit with 2GB RAM.

And prior to the Acer I’d relied on a succession of low-power, low-end netbooks – that’s how long it’s been!

Now, not being rich (a recurring theme) my budget for a new Linux laptop was a modest £400 tops. That put the really swanky Linux laptops I often write (Slimbook, Entroware, StationX, Dell, et al) out of my reach.

But thankfully all the major laptop makers offer a range of mid-level Windows 10 notebooks that were in my grasp.

Budget aside, my main requirements were thus: it had to be new; 12-14-inch screen; a minimum of 8GB RAM; and a processor that, ideally, wasn’t a Celeron.

After sifting my way through a sea of similar looking portables from the usual sellers I came across the relatively obscure Lenovo V330-14ARR for a wallet pleasing £359 — and hit “buy”.

Now, don’t get jealous; this laptop is nothing fancy at all.

Aimed squarely at “small medium businesses” (SMB), the Lenovo V330-14ARR is a frill-free, stripped back reversion of Lenovo’s V3x series laptops. No backlit keyboard, no fingerprint reader, no IPS screen.

The V330-14AAR boasts a terrible short internal battery (albeit with a slot for an optional second battery), and has a terrible 14-inch TN panel display (albeit at a fairly decent 1920×1080 resolution).

It even has a few nice extras, like a physical camera shutter, an above-par HD webcam, and a USB Type-C port to connect my dead Nexus 5X to.

The AMD Ryzen 5 2500U chip isn’t terrible for a laptop chip. In benchmarks it performs well against the 8th Gen Intel Core i5-8250U chip that’s inside my Acer Chromebook Spin 13 (this chip was my initial “would like to have”).

I set up a dual-boot with Windows 10 and Ubuntu 19.04 (though via the “something else” method, not the “install Ubuntu alongside Windows 10” option).

I’ve no major desire to use Windows 10 but I figure it’d be nice to toy around with the new Windows Subsystem for Linux 2 sometime (and if I ever get OMG! Chrome! back up and running, it’ll help).

Ubuntu 19.04 runs like a champ on this machine, by the way. Everything “just works” out of the box, including the touchpad, wi-fi, webcam, hot keys, and all ports.

So, for now, I’ll continue to squint.

One minor drawback to running Ubuntu on this machine is the scaling.

At 100%, the default setting, window borders and toolbars are a little too small. But at 200%, the only other option available by default, everything is WAY TOO BIG.

Windows 10 is set to 150% scaling by default which looks “normal” (but I find 125% looks best). I did enable fractional scaling in Ubuntu 19.04 but it seems to increase CPU load significantly.

This is in total contrast to Windows 10 which refuses to let me reverse the touchpad scrolling! Windows insists on using its own driver, regardless of how many times I install the Lenovo-provided one.

Anecdotal, but Ubuntu 19.04 with the Slimbook Battery tool also seems to give me longer battery life than Windows 10 + energy saver mode.

All that waffle simply to say I have a new Linux laptop — breaking news, right? 😉

It’s just been such a long time since I got to use proper Ubuntu while out and about in coffee shops and the like. No caveats, no catches, no limitations (well, apart from the battery).

But this post is mostly here to say a big thank you to everyone who replied to my “how is Linux support for Ryzen machines” tweet last week:

Although mixed (older Linux kernels don’t run well) your responses helped me go from ‘mulling a purchase’ to ‘making a purchase’ in double-quick time.

And as this machine only cost £359, I’ve got £41 left over to spend on a decent bluetooth game controller…

Not only can I will I be able to use Ubuntu away from home, but I might finally be able to play SuperTuxKart properly…

Home » Hardware » I Have a Dedicated Linux Laptop Again, But You Won’t Be Jealous… 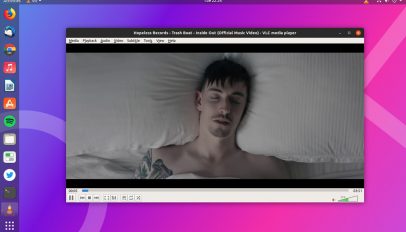