The upcoming GNOME 3.34 release is sure to ship with a stack of improvements, new features and core app updates — but it will also come with a brand new default wallpaper!

GNOME designer Jakub Steiner is, once again, diligently designing a new desktop drape for the revered free desktop to use by default.

And although the intended design is not final-final, it’s almost done! So here’s your first look at the brand new GNOME 3.34 wallpaper:

Those purples and pinks are very Ubuntu, aren’t they? I think they give the entire background a warmer, more inviting look.

The new design is certainly in stark contrast to the icey-blue and rather sharp geometric background used by GNOME 3.32:

I reckon the rich plum color palette paired with the free floating hexagons (which appear to have a slight perspective blur in places) gives the whole wallpaper a more welcoming, warm and sensual feel.

But it’s not shipping alone.

Per tradition, the new stock Adwaita wallpaper comes accompanied by both a morning version and a night variant. For these variants Jakub adjusts the ‘lighting’ that lays over the wallpaper to great effect:

The morning, day and night variants are used in the Adwaita slideshow available in GNOME Shell by default. When set, the slideshow automatically changes wallpaper throughout the day (the morning version appearing in morning, night at night, etc).

The default backgrounds? Change is expected, but there’s also been a small shuffle over in the ‘supplemental wallpapers’ set that the GNOME desktop ships with.

Among the changes is the addition of this colourful ‘Stripes’ background. It replaces the old ‘Sandstone’ image:

Stock wallpapers — who cares, right? Well, er, I do, and since it’s my fingers frolicking over the letter keys… ;)

But default wallpapers have a role, too.

Glance over the shoulder of a few coffee shop laptop users and quickly discover that an awful lot of people stick with the default wallpaper their system came with.

So, from a design, branding and first-impressions POV, they are kinda important.

Heck, vanilla GNOME Shell shows the default wallpaper and, er, that’s pretty the only thing you see by default as there’s no on-screen dock or desktop icons present!

You don’t have to wait until the GNOME 3.34 release in October to use any of the sumptuous new designs on your desktop.

You can grab any (or all) of the GNOME 3.34 backgrounds (which should be still be considered a work in progress until release day) from the GNOME Gitlab. Most are available in ~4K resolution or thereabouts:

For reference, the Adwaita backgrounds are copyrighted to Jakub Steiner but licensed under Creative Commons Attribution-ShareAlike 3.0 License.

Don’t be shy: let me know what you think of these in the comments!
News Wallpaper adwaita gnome 3.34 wallpaper 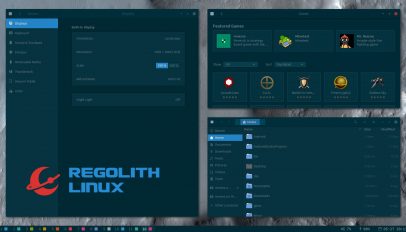