We’ve given you a whistle-stop tour of everything new in the Ubuntu 19.04 release — now our focus falls on to the family of official Ubuntu flavours.

New versions of distros like Ubuntu MATE, Xubuntu, Ubuntu Budgie and Kubuntu (among others) are available to download as of April 18.

Keep reading to get an overview of each release, including key new features, notable changes, and those all-important download links.

But do remember that all official Ubuntu flavours are based on regular Ubuntu. This means they share the same foundation (Linux Kernel 5.0, Mesa 19.0, Xorg, etc), come with the latest versions of Firefox and LibreOffice, and have access to the same software.

After several feature-packed updates, Ubuntu MATE, hitherto the go-to version of Ubuntu for many, is taking a more modest tack with its latest release.

Ubuntu Mate 19.04 doesn’t even use the latest MATE desktop release. Instead, it opts to stick with the MATE Desktop 1.20, with its devs referencing ‘stability reasons’.

There are a handful of notable tweaks and improvements on offer, though.

For instance, tweaks to the MATE Dock applet enable it to better mimic the Unity Launcher (useful in the ‘Mutiny’ desktop layout), and there’s system support for Remote Desktop Awareness (RDA).

Ubuntu MATE 19.04 is available to download using the link below in 64-bit build only. Need a 32-bit version? You’ll need to stick with the most recent LTS release instead, sorry!

Ubuntu Budgie 19.04 features the very latest version of the Budgie desktop environment, v10.5.0. This uplift builds on the features found in the distro’s previous release (which we loved, btw).

Nemo, the Linux Mint file manager, replaces Nautilus in this release (Nautilus remains available in the repos). This switch was necessary to maintain the distro’s ability to show icons on the desktop (a feature removed in Nautilus). As an upside, some new (old) file manager features have returned, like split screen and tree-view.

Another major change, Ubuntu Budgie 19.04 moves the ‘Plank’ dock to the bottom of the screen (previous versions had it on the left). The dock also features a new, and rather cute bounce animation for opening apps.

Elsewhere the distro makes a switch to the ‘Noto Sans’ font for its interface, uses the ‘Qogir Budgie’ GTK theme, and adds the (awesome) Catfish search tool is now part of the default software set.

The latest version of Lubuntu ships with the latest update to the LXQt desktop (v0.14.1), plus updated apps, and added stability.

Lubuntu also uses the Calamares system installer (rather than Ubiquity like most Ubuntu flavours). A new version of this is used in this release, which includes support for  full-disk encryption.

Keen to try it out? Grab a 64-bit .iso from the download link below:

The latest versions of popular KDE software, such as Latte Dock, the Falkon web-browser, and kio-Gdrive, a handy library which lets desktop apps access files kept on your Google Drive.

Championed as the Linux distro that doesn’t make major changes often, much of what’s on offer here is most of what is on offer in the previous releases.

There are a couple of notable changes however, including:

For a frill-free desktop environment that keeps out of your way, the XFCE desktop is ideal. But XFCE based atop Ubuntu 19.04? Heck, that’s even more ideal!

The 25th release of Ubuntu Studio is pretty packed, based on the official release notes.

The Ubuntu Studio installer allows you to add extra apps and tools on the distro, as well as install Ubuntu Studio’s packages on top of a different Ubuntu flavour (take your pick from this entire post!).

The ‘Materia’ GTK theme now ships as standard, and is complimented by the (rather terrific) Paprius icon set.

Among various app updates is a new version of Ubuntu Studio Controls, now on version 1.7. The app, which has some GUI improvements, is now the recommended way to start Jack on Ubuntu Studio. 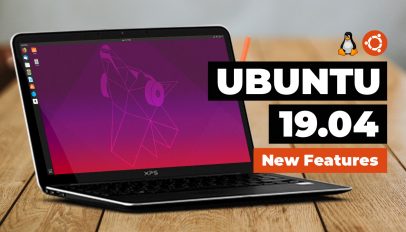