Catfish is my go-to file search tool on the Ubuntu Linux desktop — and going by improvements in its latest release, it might just become your go-to search tool, too!

But before we take a look at the changes that are on offer in Catfish 1.4.7, here’s a quick recap of the tool should anyone be unfamiliar with it. 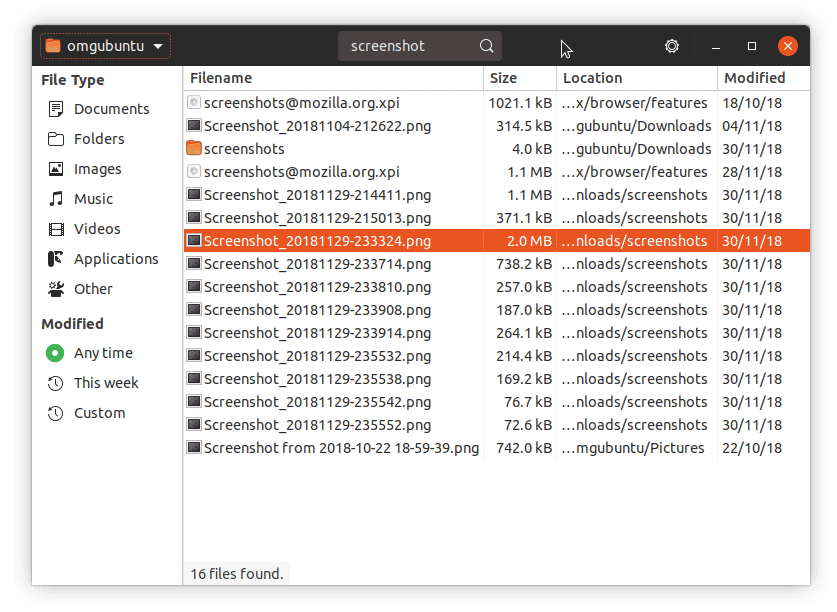 A lightweight file search tool, Catfish is able to sift, scan and search through your Linux desktop, including hidden files, to find files based on a particular query or file type. The returns results fast and displays them in a sortable list view (default) or in a thumbnail grid.

Although developed under the XFCE umbrella — hence you’ll find Catfish installed by default in distributions like Xubuntu — the app works fantastically well on most Linux desktop environments, including GNOME Shell, Budgie and Cinnamon.

GUI search tools aren’t for everyone, and we’ve covered some very complex regex-rootin’ wonders in the past.

Dropping to the command-line to run find or locate to do a file search is perhaps a tad quicker, especially for those with fast keyboard reflexes, but Catfish is no slouch.

The clean, functional, and straightforward interface of Catfish is finely tuned to let you find files and folders quickly, without expending any unnecessary effort.

Although developed under the XFCE ‘umbrella’, Catfish works just fine with most Linux desktop environments, including GNOME Shell, Budgie and Cinnamon.

In Catfish 1.4.7 this means the Catfish window layout will now respect the current desktop settings. This means you’ll see a header-bar (CSD) layout when running the app under GNOME Shell, Budgie, or Pantheon, and a traditional titlebar layout on XFCE, Cinnamon, and MATE desktops.

Should you wish to override this option (perhaps you love CSD and MATE) just tweak the Catfish configuration file stored in ~/.config/catfish/catfish.rc.

Elsewhere, Catfish now lets you drag search results out of the app and on to other applications. When dragging file(s) to a file manager (e.g., Nautilus, Nemo, Caja, et al) the file(s) will usually be copied, while dragging files onto an application (e.g., GIMP, Pinta, LibreOffice, etc) will open the file inside the application.

Finally, now that Catfish only generates file thumbnails when the thumbnail view is active, file results should load faster than before under the standard list view.

The app also adds the /dev directory to its list of standard excluded directories. You can still search for files within /dev if explicitly stated, otherwise they’ll be skipped. Again, this will make general results faster.

How to Install Catfish File Search on Ubuntu

To install (a marginally older) Catfish on Ubuntu or Linux Mint just pop open your favourite terminal application and run:

Alternatively, hit this button to install Catfish on Ubuntu via the Ubuntu Software store:

It’s possible that the official Catfish PPA will be updated with this latest release in the coming days. Alternatively, if you can’t wait, you can download the source and compile by hand from the Catfish page on the XFCE Git.