Google yanked the phone-side companion app, which works with desktop tools like GSconnect, from its Android app store on March 19. It said the app did not adhere to its new rules on apps that can access to SMS messages.

What Is KDE Connect?

For those unaware, KDE Connect is a “swiss army knife” tool that lets you connect your Android phone to your desktop PC wirelessly.

Pairing the KDE Connect Android app and desktop app enables neat integrations. This includes the ability to browse your phone’s filesystem wirelessly through Nautilus or Dolphin; reply to Android notifications from the desktop; and (until now) send/receive SMS messages.

The suspension was brief; the app is back up on Google Play, albeit in a modified form. Albert has had to remove SMS features from the version of the app that is available on the Google Play Store:

Let me stress that KDE Connect does not do anything dodgy with SMS messages.

The linked policy document is (perhaps rightly) strict about the kind of apps that can access sensitive areas of users’ phone, like SMS and call logs.

Developers are permitted to access call log or SMS permissions by Google so long as it’s used to enable “critical core functionality.” 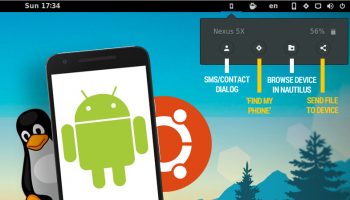 Setup Guide
How to Connect Your Android Phone to Ubuntu Wirelessly

They ‘define ‘core functionality’ as being features “prominently documented and promoted in the app’s description” and without which the app is considered “broken”.

It’s difficult to argue that SMS is “core functionality” of the KDE Connect. The app does a multitude of things, most of which are optional or opt-in (like SMS sending).

The way the rules read, devs can’t offer SMS features unless it’s required. And in KDE Connect, it’s not (by design).

KDE Connect is far from the only app affected by this policy change. There’s an in-depth Reddit thread on /r/android providing a timeline of events in this “fiasco”.

Albert isn’t rolling over. He says he’s filled in the relevant forms that Google offer. These forms let him request that the KDE Connect app be whitelisted so it can continue to leverage SMS features.

So, while KDE Connect from the Play Store doesn’t have SMS capabilities at present, they might not be gone for good.