With the Ubuntu 18.10 release now available to download, here’s our in-depth Ubuntu 18.10 review to help you decide whether it’s worth downloading — or not!

With 6 solid months of development behind it what changes does the Ubuntu 18.10 release bring? What’s improved? And should you go out of your way to upgrade or install?

Well, we’ll get to all that in a second. You’re probably itching to download Ubuntu 18.10 already, so hit this button below to grab it now, and then keep reading for out thoughts. 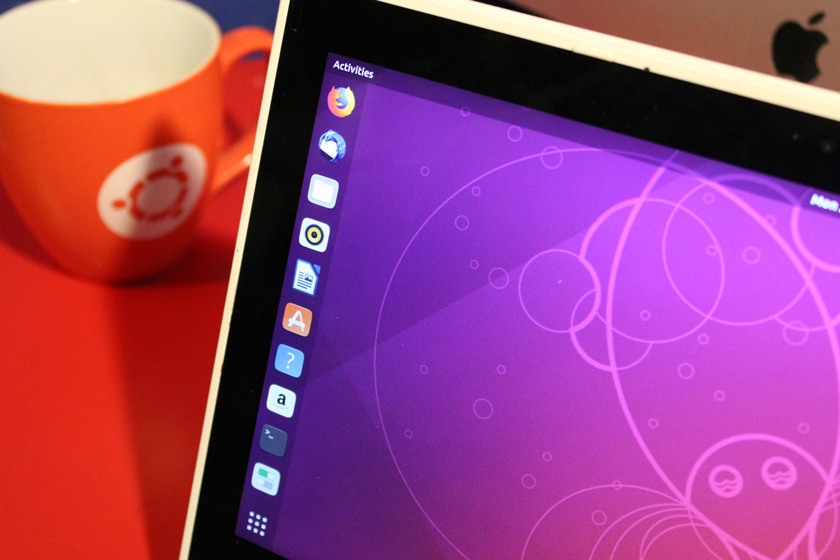 Ubuntu 18.10 is the latest version of the Ubuntu Linux operating system. It was released on 18 October as a free download, available for anyone to try, install and use.

It has the untenable task of following April’s warmly-received Ubuntu 18.04 release, something that was never going to be easy.

Six months on, with Ubuntu 18.10 released and available to download, it’s time to find out wether the “Cosmic Cuttlefish” soars to new heights, or sinks under the weight of expectations.

And the answer? Well, it’s a fudge.

Ubuntu 18.10 ‘Cosmic Cuttlefish’ is a modest update compared to 18.04. The vast majority of notable improvements are tucked away out of sight, ‘under the hood’.

But although you can’t “see” the changes that shape Ubuntu 18.10, you almost certainly will feel them.

I don’t have hard stats to back it up, and it’s based entirely on my own personal experience, but Ubuntu 18.10 feels a lot faster than 18.04.

Upstream GNOME Shell developers spent the past six months trying to lower GNOME Shell’s memory usage and improve the overall performance of the shell, its animations, display manager, and parts of the GNOME extension framework (specifically Gjs), as we touched on in our recap of the new features in GNOME 3.30.

Invisible and abstract though these changes are, they’re appreciable. So much so that, if I had to describe this release in just one word it’d be “peppy“. That’s testament to the power of collaboration; with upstream devs and Canonical’s engineering team working together.

Things will never be perfect, and technical limitations mean the desktop will never be 100% where it ought to. But things feels distinctly less hefty. Animations are smoother. Transitions stutter less. And overall responsiveness of the shell and window effects is more pronounced. 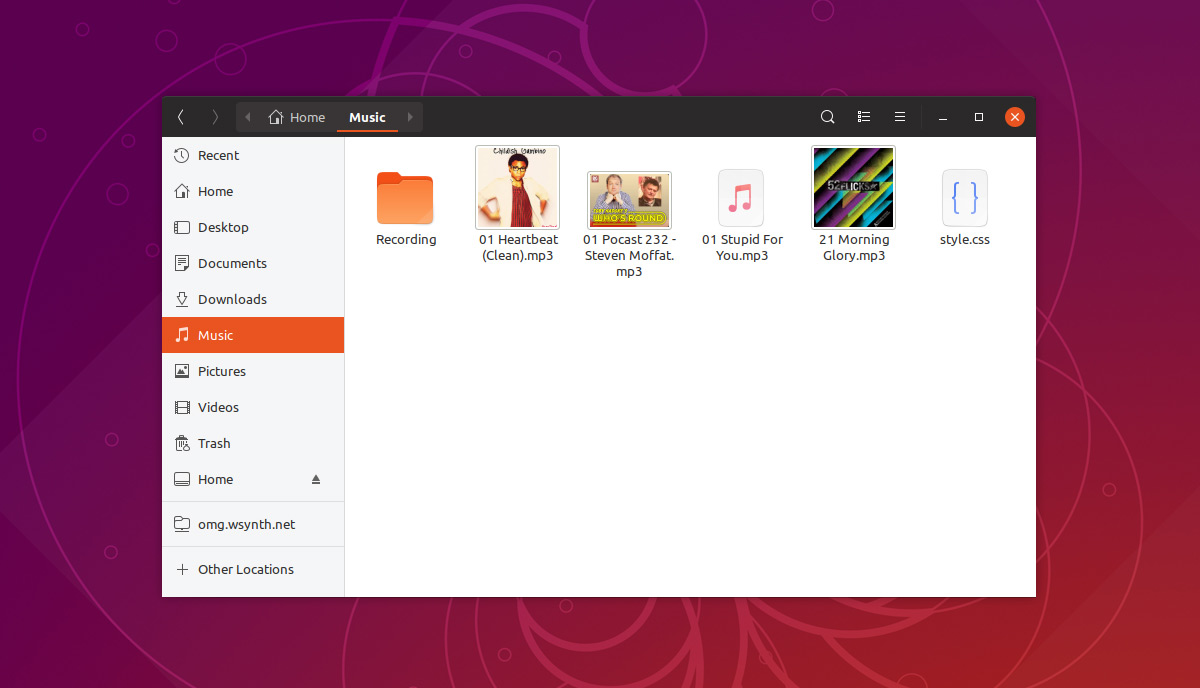 It’s fitting that the codename for 18.10 is a creature famed for its chameleonic ability to change colour because Ubuntu finally has a new look.

Yaru is a professional looking theme, with curves, colors and gradients in all the right places

Yes, the distro that modern design trends had seemingly passed by has now ditched the dated brown Ambiance theme in favour of something newer.

Dubbed “Yaru”, the new theme is the work of the Ubuntu user community (and was known as the ‘Communitheme’ for a while). And hats off to them as they’ve done some stellar work.

Yaru is a well polished and professional looking theme, with curves, colors and gradients in all the right places. Though there are one or two brought edges, mostly with different menu colours in certain apps, it’s a solid new look.

Ubuntu was in need of visual revamp, and with Yaru gives it one.

Anyone not won over by the bold new look can install the Ambiance GTK from the archives, where it sits alongside a raft of other great GTK themes.

The Suru icon set is modern, but has a stylistic uniformity that users will either love or dislike

Inspired by the Ubuntu Phone and Unity 8 projects, Suru ushers in a stylistic uniformity that users will either find fabulously consistent or rigid and excessive, depending on their tastes.

The “effect” of uniformity, of using the squircle shape for icons, mean the apps which lack a flat, simplistic glyph style and ‘squircle’ shape stand out like a sore thumb. It’s almost as though there’s something different about them.

Not that this matters too much. Plenty of excellent icon themes are available in the archives, including comprehensive packs like Numix and elementary. And with a dramatic GNOME icon redesign now underway, there’ll soon be some more competition.

Cosmic comes with the majority of the latest GNOME 3.30 release on board.

This includes new versions of core apps like Calendar, To Do and the venerable GNOME Terminal emulator.

The Settings app now has a dedicated section for managing Thunderbolt 3 devices; dynamic hardware panels see the Wi-Fi and Bluetooth sections hide when compatible hardware isn’t present; and for audiophiles there’s a toggle to push volume past 100%.

Also of note, the Disks utility can now decrypt and mount storage volumes encrypted by VeraCrypt.

Not everything has been updated, though. Ubuntu 18.10 ships with an older version of the Nautilus file manager. This is to ensure that desktop icons continue to work the way we’re used to. 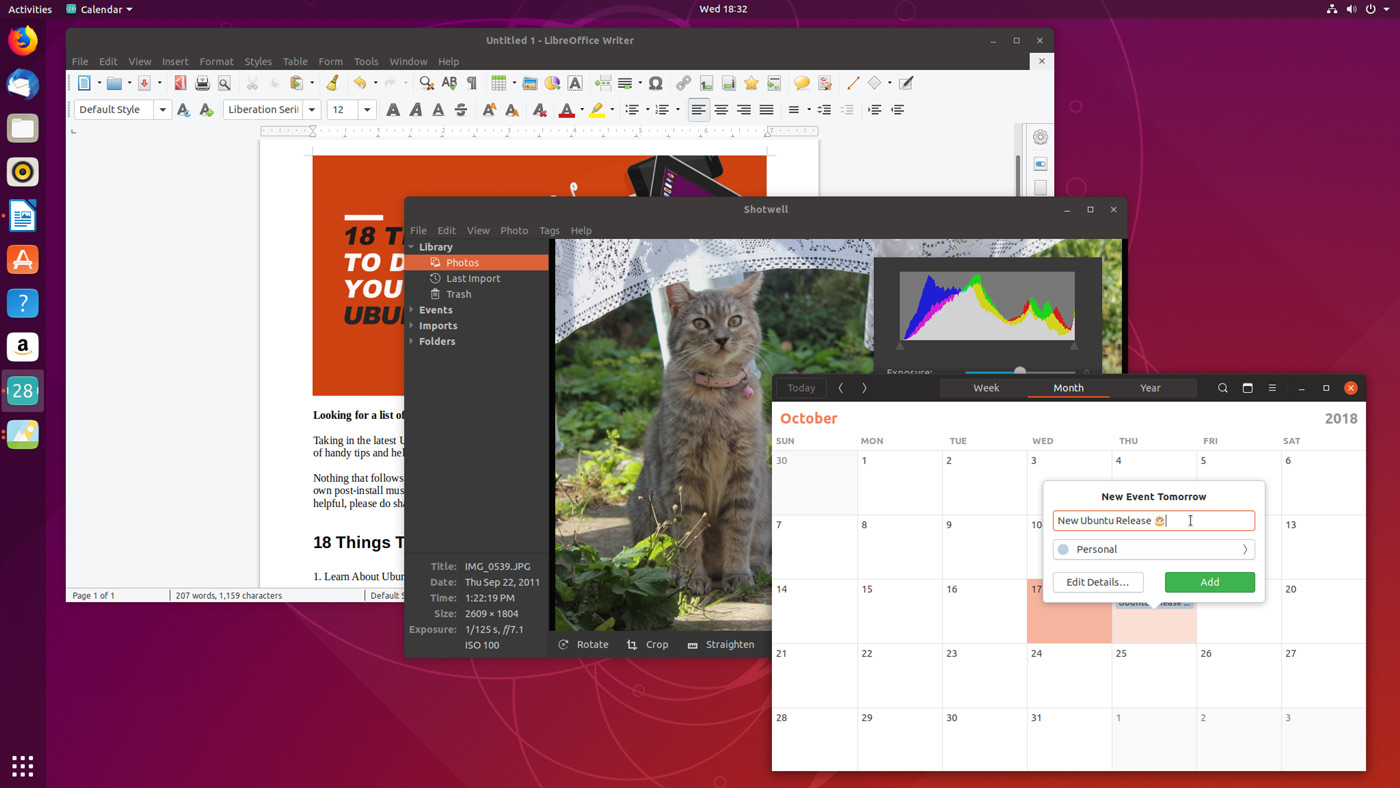 Ubuntu likes to showcase the best that open source has to offer, and this release is no exception. The latest versions of key apps are pre-installed, ready to go out the box.

The Ubuntu repos have also been refreshed so that a tide of other ace apps, like GIMP, VLC and Krita, are readily available. 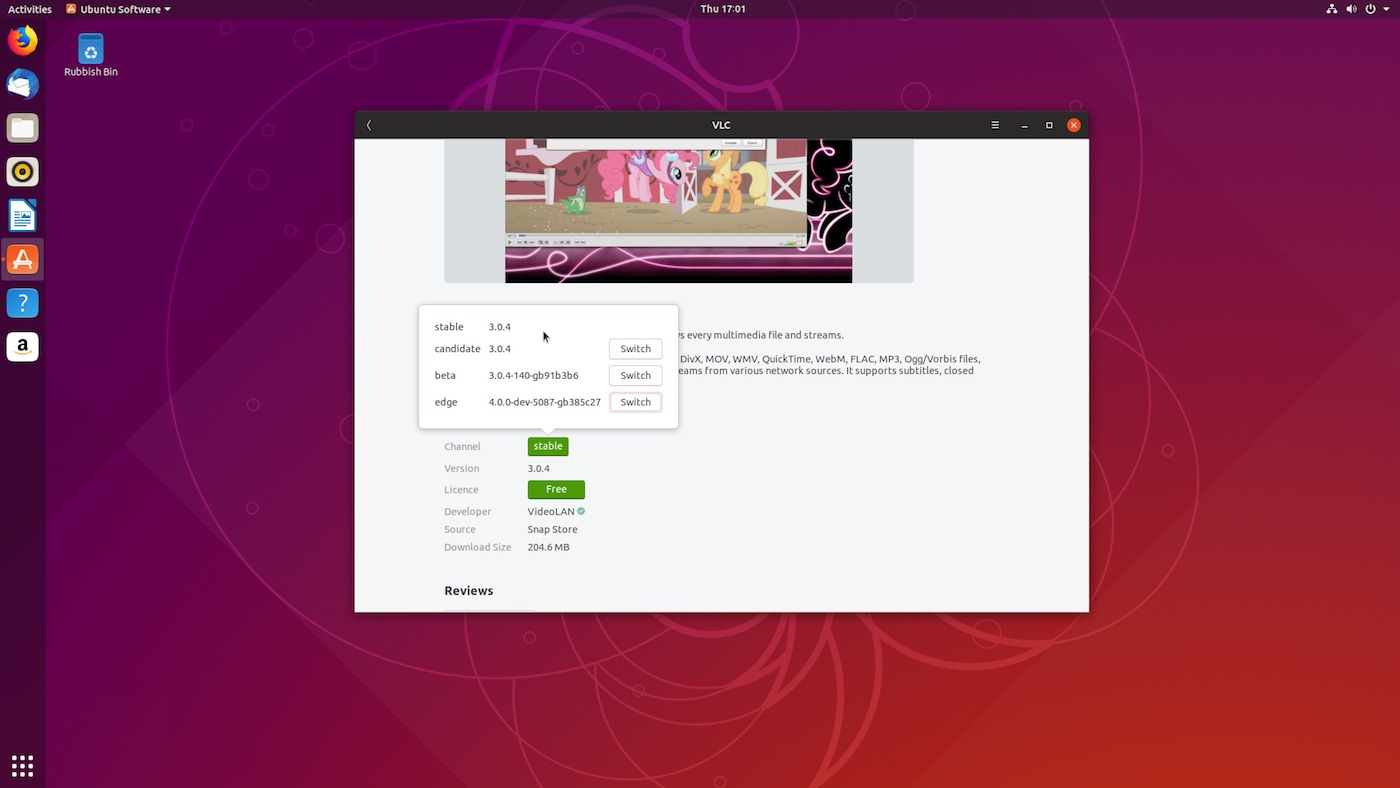 If you’re an avid user of Snap apps on Ubuntu — and judging by the tech’s rapid adoption, chances are you are — then there are a couple of notable  changes to appreciate in Cosmic.

I should note that many of these changes either have been back ported to Ubuntu 18.04 LTS or soon will be. So if you’re rocking the LTS, you’ll benefit too.

This version of the kernel adds, among other things, support for AMD Radeon RX Vega M graphics processors, complete support for the Raspberry Pi 3B and the 3B+ models, and improved Thunderbolt and USB Type-C tweaks.

A reverse engineered Steam Controller driver also features as part of the mainline kernel. This lets the Steam Controller work as a regular HID (input) device ‘out of the box’, no Steam app required.

The latest Mesa 18.2 graphics drivers are included too, bringing a veritable gantry of improvements, including Vega GPU support, compatibility with OpenGL 4.4, and more.

Ubuntu 18.10 will receive 9 months of security updates, bug fixes and select app upgrades. Users of it will be able to upgrade to Ubuntu 19.04 when it’s released in April, 2019.

The shorter support period is the chief reason why Ubuntu 18.04 LTS, released back in April 2018, will remain the recommended version of Ubuntu for most needs.

In all Ubuntu 18.10 is a competent improvement on 18.04, but not quite the compelling update many were hoping for. New features, like the much-talked Android integration, didn’t make it in, and there are no changes to the default selection of apps.

The Snap package format means the latest versions of core apps like LibreOffice, and even the new theme, are already available to LTS users — leaving little impetus to make the upgrade from 18.04 LTS to 18.10.

That said Ubuntu 18.10 ‘Cosmic Cuttlefish’ is not a carbon copy of the Bionic Beaver. The improved performance of the desktop will, for some, be reason alone to shuffle on up.

The Ubuntu 18.10 system requirements are broadly the same as for the past few release. To run the OS you will need a computer that matches or exceeds the following specs:

If your computer does not meet these specs you can still install Ubuntu but you might experience a slow system, general errors and so on. You may want to try a lighter version of Ubuntu, such as Xubuntu or Ubuntu MATE.

You can download Ubuntu 18.10 as a 64-bit ISO from the Ubuntu release server, linked below, or via the official Ubuntu website. An ‘official’ release announcement will follow shortly.

Use an application like Etcher (open source, and available for Windows, macOS and Linux) to “write” the Ubuntu ISO image to a USB drive or SD card you can boot off of. Size-wise you’ll need at least 2GB. 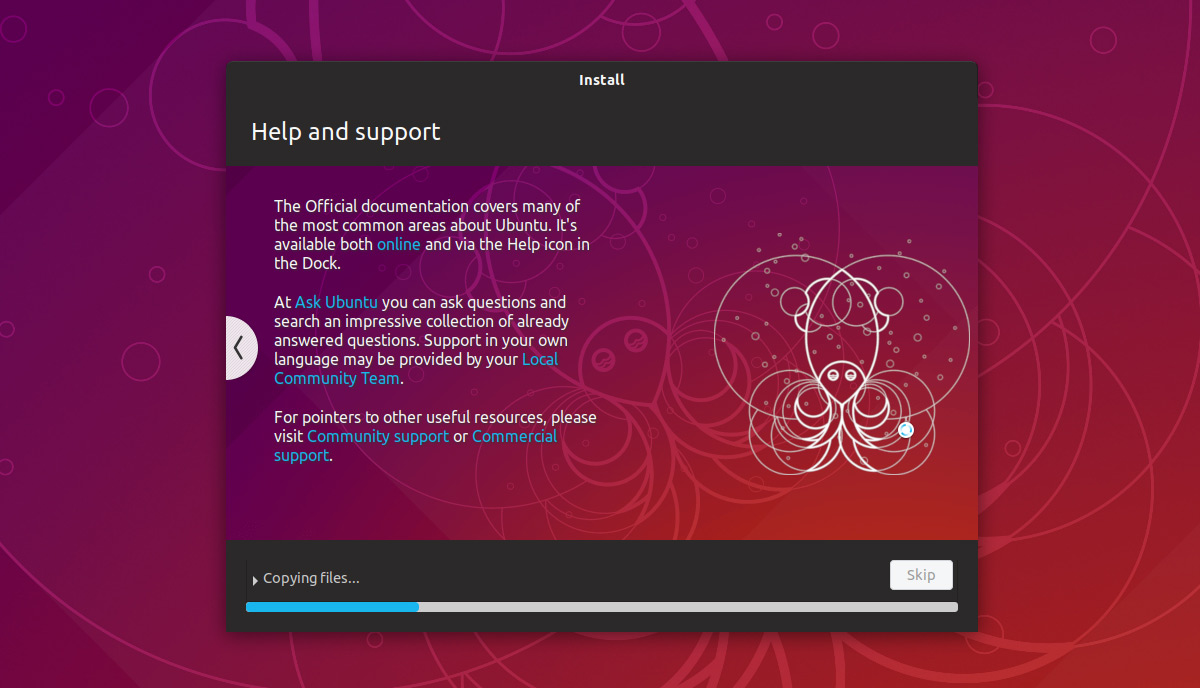 You can “try Ubuntu” live from the USB image without installing it. This is useful for finding out  whether the OS works with your system before you commit to installing it. Do keep in mind that any changes you make or files you create will not be saved, though.

When it comes to installing you have two choices: “normal” and “minimal”. Both of these will guide you through the install process, with full instruction on how to partition your hard drive to make room for Ubuntu.

That’s what we think, but what do you think? Grab a copy of this release above to try the changes firsthand then pop back and let us, and everyone else, know what you make of it.

Home » Download » Ubuntu 18.10 released, but is it worth downloading?

Julian Cardich You are speaking like an advertiser. I'm speaking from a…
Calibre 5 Released with eBook Highlighting, Switches to Python 3

Etcetera I expect SSDs will be mostly out of use, too,…
Ubuntu Replaces Its ‘Disintegrating Installer’ Icon with Something Simpler

GeorgeDao123 Much better.
Ubuntu Replaces Its ‘Disintegrating Installer’ Icon with Something Simpler

Etcetera Oh, and by the way – it took a while…
Lenovo’s Lightest ThinkPad Ever Also Runs Ubuntu