With GNOME 3.30 released, we roundup the best new features the GNOME 3.30 upgrade has to offer.

And with an approximate 24,845 changes in all, GNOME 3.30 offers both major new features and smaller improvements.

GNOME 3.30, which will ship in the Ubuntu 18.10 release in October, boasts new features, new apps, and new improvements, all designed to help improve the way we use the desktop.

So join us as we take a look at the very best new features in GNOME 3.30.

We all care about how fast and fluid our desktop is, and so do GNOME developers too.

A set of ‘significant performance improvements’ ship in GNOME 3.30, including patches designed to tackle the infamous GNOME Shell memory leak we reported on earlier in the year.

Developers from Canonical and Red Hat, as well as the open source community at large, have tackled the varying issues causing the aforementioned memory engorgement as well as other inefficiencies discovered along the way.

Suffice to say, GNOME Shell 3.30 uses fewer system resources than before. This means you can run more apps simultaneously without encountering any notable impact on performance.

Window and workspace switching is faster, while user experience animations are now smoother and stutter less.

As part of the overall performance drive GNOME JavaScript (GJS) has been updated to SpiderMonkey 60, which is the latest available version of the JavaScript engine. The GJS bump is also said to offer “significant performance improvements”.

On Ubuntu the performance improvements available in GNOME 3.30 are even better.

Ubuntu 18.10, due for release in October, will come with further performance tweaks to the GNOME Shell desktop. Canonical’s patches didn’t make it upstream in time for the GNOME 3.30 release but will be ready in time for the 18.10 release.

2. Nautilus has a new look

The GNOME file manager Nautilus is arguably the backbone of the entire GNOME desktop so it’s only right that it continues to move with the times.

So for GNOME 3.30 Nautilus’ developers have refined and streamlined core features, like search behaviour, and improved the way icons flow when resizing the window.

The path bar also sports a new look. The chunky buttons are gone. In their place is a subtle text-based look.

The pathbar are more than superficial too: you can now access a background action menu by right-clicking on path bar items.

Sadly Ubuntu 18.10 won’t ship with Nautilus 3.30 on board, but it should be available to install as a Flatpak app.

GNOME 3.30 comes with a brand new desktop app called Podcasts (which we highlighted on this site a week in August).

Podcasts lets you add and manage podcast subscriptions right from your desktop, as well as play or download episodes. It can even import podcasts stored on other devices.

It’s simple to use too. The “Shows” overview lets you browse the series you’re subscribed to by cover art, while the ‘New‘ section highlights the latest episode releases from your fave shows.

Double-clicking on a show tile gives access to a well organised overview of that show’s available episodes, along with quick buttons to stream ’em, download ’em or mark ’em as “listened” to!

If you’re a big fan of Flatpaks — I am — you’ll appreciate this time-saving feature.

GNOME Software now has options to enable/disable automatic updates for Flatpak apps and runtimes which, as someone who often tethers to a 4G connection, will disable itself on a metered connection — something Ubuntu’s Snap software does not do.

Better yet, and also in contrast to silent Snap updating, you can choose to be notified when a Flatpak app or runtime has been auto-updated.

Automatic updating of Flatpaks is enabled by default, and means you don’t need to manually approve each and every Flatpak update as it’s all done for you!

GNOME picked up native Thunderbolt support last release so it’s great to see GNOME 3.30 add a dedicated Thunderbolt panel to the Settings app. This will make it easy to manage connected Thunderbolt devices and handle any authentication.

On the subject of Settings, all hardware related panels are now dynamic. This means they hide (don’t appear) when the relevant hardware is not present.

For example, if you don’t have a Wi-Fi card or dongle on your system you won’t see the Wi-Fi panel anymore!

A crop of new advanced settings are available to toy with in the latest version of the GNOME Tweaks utility.

Options include a sound theme selection menu (if you fancy being audibly hassled every time an error dialog appears); a switch to Center New Windows by default; a switch to tile windows when dragging them to screen edges; and a toggle to show the current weekday in the GNOME Top Bar clock-come-notification-shade.

In addition, GNOME users get a feature Ubuntu has had for a few releases: an option to enable ‘overamplifaction‘ (aka cranking up the volume past 100%). When enabled you’ll see an extra  red bar appear in volume indicators and on screen display.

Games is one of my favourite GNOME apps — and I’m thrilled by the updates made in this release.

Best described as a music player, but for retro and modern games rather than music, Games offers up a clean, lean UI and built-in support for playing games using libretro cores.

If you install the Games app from Flathub (recommended) you’ll also get out-of-the-box support for playing Sega Game Gear and Master System games, as well as Nintendo DS and Virtual Boy titles.

If you’re a big reader of online content then you may appreciate how useful a “reader mode” feature can be.

The feature takes a regular web page — like this one — and strips it of all extraneous cruft, like menus, images, embeds, and other content. The end result is a clean, minimal presentation of the body text.

And in GNOME 3.30 Web, the GNOME browser still known as Epiphany by some, includes a reader view feature by default — nice!

But that’s not all. Oh no! There’s plenty more to look out for, including:

Although many Linux distributions come with GNOME by default few distribute major new releases right away, instead choosing to ship the update as part of a new release.

Rolling release distros are the exception of course, so Arch, Manjaro and others will likely make this update available soon.

What GNOME 3.30 features are you most looking forward to? Let us know!
List News epiphany GNOME 3.30 nautilus podcasts 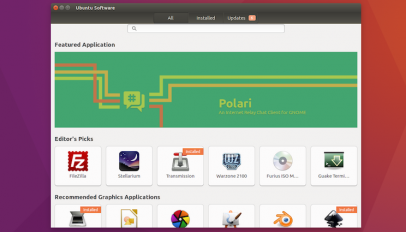