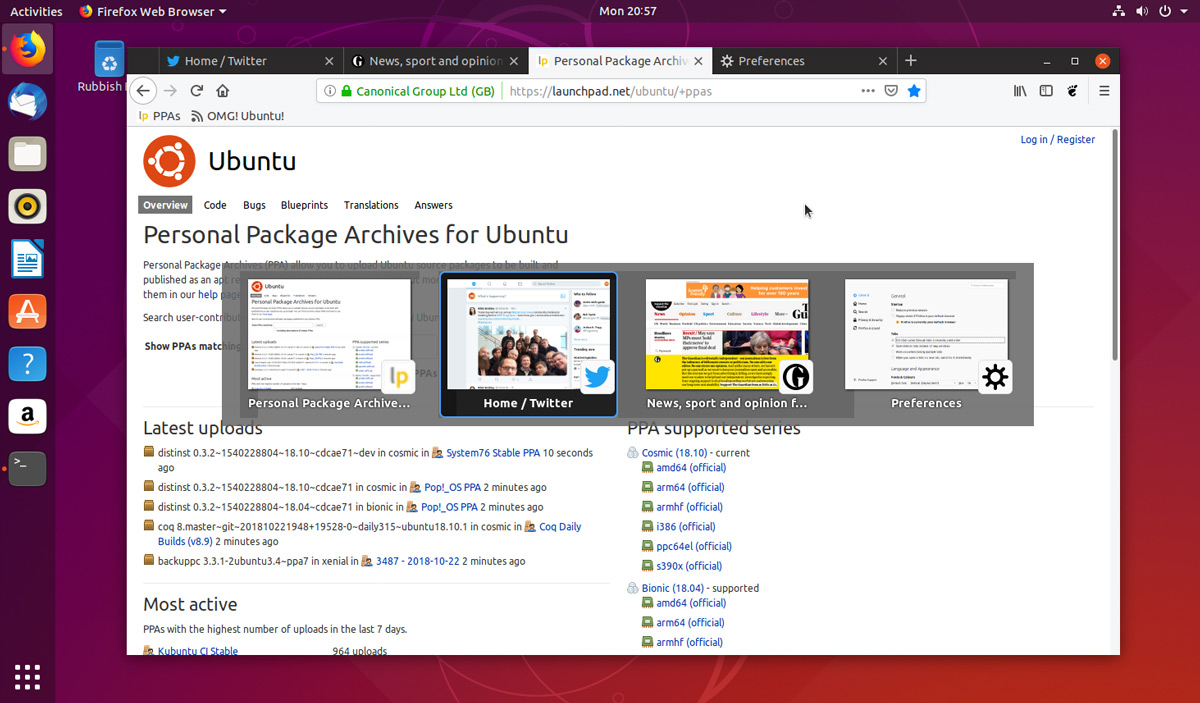 A new version of the Mozilla Firefox web browser is now available to download.

Firefox 63.0 serves as the latest update and comes packed with a compelling crop of new features and other improvements.

Out of process extensions

Firefox 63 is the first version of the web browser to run web extensions (previously known as add-ons) in their own processes on Linux systems. Firefox already runs “out-of-process extensions” in its Windows and Mac builds.

Although largely a technical change it should lead to some tangible performance benefits, and help improve the overall security and stability of Firefox. Should an add-on crash or have a memory leak it can no longer take the rest of the browser (or its tabs) with it.

The Ctrl + Tab shortcut for switching between open tabs will show thumbnail previews of each open tab by default for new profiles. Existing users can choose to enable this from the about:preferences page.

As well as looking a little more immersive, the tab switcher now cycles through open tabs in ‘recently opened’ order, with the tab most recently opened being the first tab in it attempts to switch to. This behaviour is only enabled on new Firefox profiles and can be adjusted in preferences.

Naturally there are plenty of other changes for web developers, the inspector, and support for upcoming CSS and HTML5 features.

Mozilla Firefox 63 also makes a number of semi-notable removals. The “Open in Sidebar” feature for individual bookmarks in the Library is gone, as is the the option to ‘never check for updates’ from about:preferences (not that this setting applied to most Linux users).

How to Get Firefox 63

Firefox 63 comes preinstalled on Ubuntu 18.10, so if you’re running the latest release you should already have Firefox 63 installed.

Those of you on Ubuntu 18.04 LTS will be able to upgrade to Firefox 63 using the Software Updater tool, so be on the look out for a Firefox update over the next few coming days.

Finally, if you on a different Linux distro, running Windows or macOS, or simply don’t want to wait for the update to trickle out through some other method, you can download Firefox 63 directly from the Mozilla website:

Carlos Felipe Araújo you are burning our eyes with this image @_@
Nautilus 40 Arrives in Ubuntu 21.10 Daily Builds