Amazing news out of Variety, the entertainment website, this weekend: Hollywood is going open source.

The Academy of Motion Picture Arts and Sciences — best known for ‘The Oscars’ award ceremony — has teamed up with the Linux Foundation to launch the Academy Software Foundation (ASWF).

The goal: to promote, advance and advocate for the use of open source in film making and the wider media industry.

A non-profit organisation, the ASWF will provide a ‘neutral’ space for artists, engineers and developers to share work and collaborate on projects, thereby increasing both the quality and quantity of open source tools.

It will also try to tackle issues around open source licensing (some companies don’t know which one to pick) and help to manage open source projects under the ‘ASWF’ banner.

Jim Zemlin, Executive Director of The Linux Foundation, is bullish on its creation, stating (emphasis ours):

“With the Academy Software Foundation, we are providing a home for this community of open source developers to collaborate and drive the next wave of innovation across the motion picture and broader media industries.”

This is backed up by  David Morin, project lead for the Academy Open Source Investigation, who adds (emphasis ours):

“The Academy Software Foundation is set to provide funding, structure and infrastructure for the open source community, so that engineers can continue to collaborate and accelerate software development for moviemaking and other media for the next 25 years.”

Collective effort, creative freedom, and a sense of shared ownership are vital components in a healthy, thriving open source community.

This is something the ASWF will endeavour to foster through 5 key goals:

Can it fulfil these ambitions?

Open Source in the Film Industry

Surprised by this news? I’ll admit I was, but perhaps I shouldn’t have been.

It turns that an estimated 80% of the film industry already use open source tech in parts of their post-production pipeline.

That figure includes a slate of high-profile film studios which both publish, support and freely distribution their own open source tools, such as OpenVDB by DreamWorks, OpenTimelineIO by Pixar and PTex by Disney to name but a few.

The launch of this new non-profit foundation means future for these, and other, open source tools looks brighter than ever.

By providing a forum in which engineers and artists can openly and freely collaborate, innovate and create the media industry as a whole stands to benefit from newer, better and more efficient tools.

It’s not a given that any of the software gestated under the auspices of the ASWF will become available on Linux — open source ≠ Linux, after all — but users of all platform stand to benefit.

For an in-depth look at how the foundation will work in practice there’s an excellent interview with the ASWF over on FX Guide. 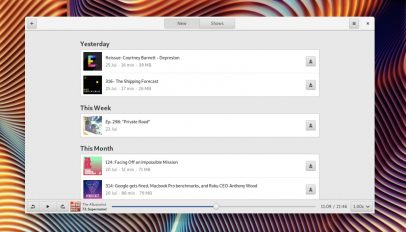 ‘Podcasts’ is a new podcast app for Linux
Read Next