Do you use Ubuntu Studio? Chances are you don’t — but the team behind the creatively curated community spin hope that’ll change in the near future.

Plans are afoot to “reboot” Ubuntu Studio for its upcoming October release. There’s talk of new software, a new look, a new website, and a renewed sense of purpose.

The team is even open to the possibility of using (or at least offering) an alternative desktop environment.

In a recent team meeting the folks behind the official Ubuntu flavor plan to approach 18.10 with, in their own words “a little “shock and awe” factor”.

What is Ubuntu Studio?

Currently an XFCE-based distro, Ubuntu Studio is preloaded with ‘best in class’ FOSS apps for content creation. This includes GIMP, Inkscape, Blender, JACK, Darktable, FFMPEG, Ardour, and many, many more.

It’d be great to see the likes of VLC, Kdenlive and Entangle join the list of tools.

The aim of Ubuntu Studio is to “give users the best multimedia experience” that free, open-source software has to offer.

A bespoke distort tailored for ‘creatives’ it may be, but I don’t think it would be unkind to suggest the flavor has become a little …invisible of late.

The past few releases have featured virtually no major changes beyond core app updates. While that isn’t a bad thing per se, this iterative inertia has stalled momentum somewhat; with few changes to “sing” about, the distro’s USP is firmly lost amidst the crowd.

And sadly, with limited man power, the April release of Ubuntu Studio 18.04 will not be an LTS.

Is there a still a place for Ubuntu Studio?

In the years before high-speed internet access was common place the idea of installing a Linux distro pre-loaded with specific set of apps had an appeal. It saved you time, effort and hassle.

Nowadays anyone can curate their own set of tools with a simple apt-get, flatpak install or snap install command. The convenience of using a pre-moulded base is, therefore, a little less apparent.

If Ubuntu Studio is to remain relevant it has to regain a sense of pace.

Creativity is a fluid force; ever changing, evolving, adapting. An OS tailored to creatives needs to be as malleable and as flexible and as accessible as possible.

Thus, the idea of adding a ‘welcome’ app to the desktop, presumably to help users tweak the desktop to suit their needs, is exactly the right idea. I’d take the idea further to offer UI and UX related changes too, like dark/light themes, a night-light feature, and so on.

I’d also love to see the flavor embrace the community through an in-desktop contributory element, be it a wallpaper contest, a showcase of content created by Ubuntu Studio users, or simply surfacing “how to” and related tutorials on the software it ships with.

In summary, there is no other distro serving the creative niche with as much thought as Ubuntu Studio.

So to answer my own question there is absolutely a place for a well designed, well made and well supported Linux distro to showcase the best creative tools open source has to offer.

Do you use Ubuntu Studio? Have you used it in the past? What do you think the spin could do to help further FOSS multimedia creation? 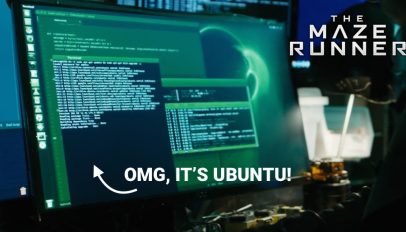 Ubuntu Spotted in ‘Maze Runner: The Death Cure’
Read Next