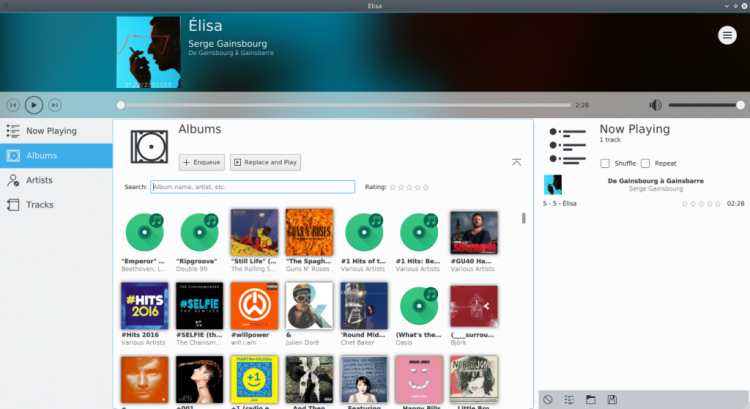 If you’re on the hunt for a modern looking music app on Linux look no further than Elisa.

Perfect for those of you running Kubuntu or KDE Neon, the Qt-based Elisa music player is a modern, fresh looking app that aims to be “simple to use”.

‘Elisa wants to be a first-class option for users of any Linux desktop, including GNOME Shell’

“Elisa is a music player developed by the KDE community that strives to be simple and nice to use. We also recognize that we need a flexible product to account for the different workflows and use-cases of our users,” the project page reads.

While the obvious “focus” for the player is on integration with the KDE Plasma desktop, it has ambitions beyond it too. Uniquely, Elisa wants to be a first-class option for users of other Linux desktop environments, like GNOME Shell, as well as users of Windows and Android.

But first things first, like a first formal release!

Elisa 0.1 is the first formal release of this music app. Naturally it isn’t packed full of extra bells and whistles yet, but the majority of core music player functionality is present and working:

The Elisa music player team say their aim with the debut release is to “provide a solid foundation for new features [to be added]”.

Later releases may include support for online services that respect user privacy.

It’s been a while since we took a look at the best music players for Ubuntu, and it’s an app category that continues to grow.

Elisa is not the only “new” music player for Linux desktops that has us excited. GTK-based Lollypop recently demoed a slick responsive UI, while the Qt-based — and forever-in-development — Babe music player continues to make us swoon.

And for “new old” players, Amarok was recently revived with plans for a full Qt5 port.

How to Install Elisa Music Player on Ubuntu & Other Linux Distros

If you’re using KDE Neon Developer Unstable you can install Elisa from the repos. Just search it out using your preferred package management tool.

On Arch? You can install a development snapshot of Elisa from AUR. Fedora users can snag some pre-built packages from this repo.

For Ubuntu users …Well, there are packages available in a couple of PPAs, but these PPAs are not intended for general use and could break your system.

Finally, if you’re a fan of building things from scratch you can snag the source code for Elisa 0.1 from the KDE website.