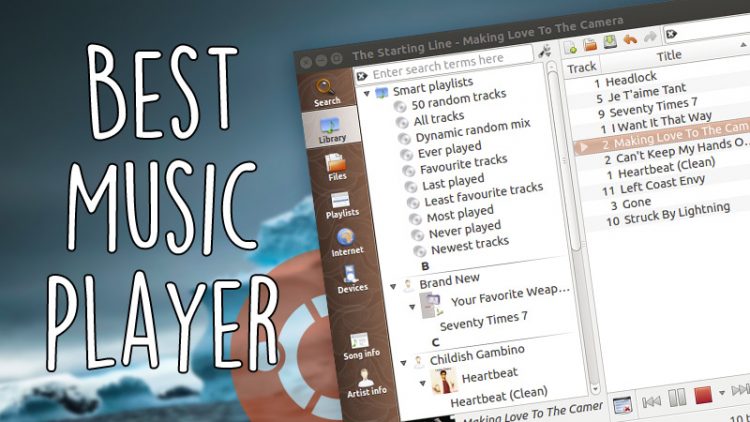 Most of us listen to music when using our computers to pass the time, motivate us, or even help us concentrate (no, really) — but what are the best music apps for Ubuntu?

It’s a question that I see new (and not so new) Ubuntu users ask all the time. Answering it is not easy, though not through a lack of choice!

Finding music players for Ubuntu is far from difficult. A veritable orchestra of options exist, some new, some old, some in tune with modern trends, others riffing to their own bespoke beat.

There’s a good chance you’ve already spun through a chorus of players yourself — and so have we. So in this post we present the 6 best music apps for Ubuntu, Linux Mint, as well as most other Linux distributions. 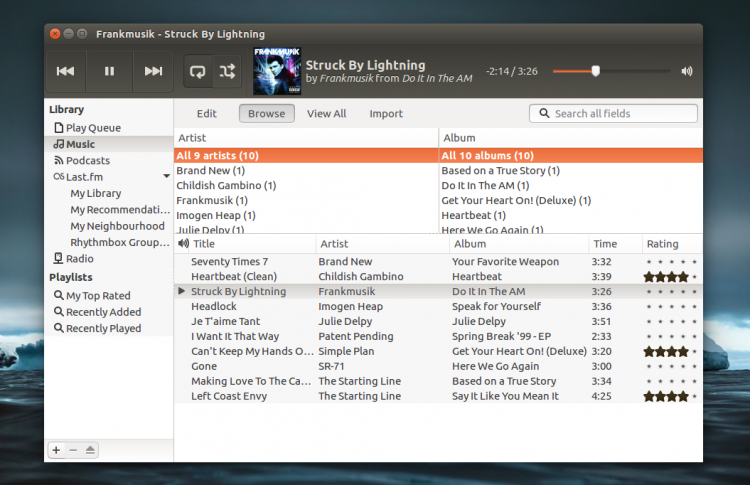 Rhythmbox is the default music player in Ubuntu, and as such merits a place in this list. Widely used, Rhythmbox is a reliable, dependable, and extensible GTK music player that uses the Gstreamer backend.

The standard layout of the app is straightforward to navigate, and it’s easy to filter through your music using the column browser or the search box.

Not that you have to settle for this look as a variety of Rhythmbox plugins can be added to customise, rearrange and transform the look and feel of the player into something else entirely.

Rhythmbox can automatically watch for new music files stored in the ~/Music folder. You can also point the app to look at other sources or folders should you have them.

The app lets you do more than just play, manage and sort music and create playlists. It can scrobble to Last.fm, and it has built-in support for podcasts and internet radio stations. The player also boasts integration with online music service SoundCloud.

For an improved experience on Ubuntu I highly recommend using the rhythmbox-plugin-alternative-toolbar available in the Ubuntu repos as it makes the app look 10x better. 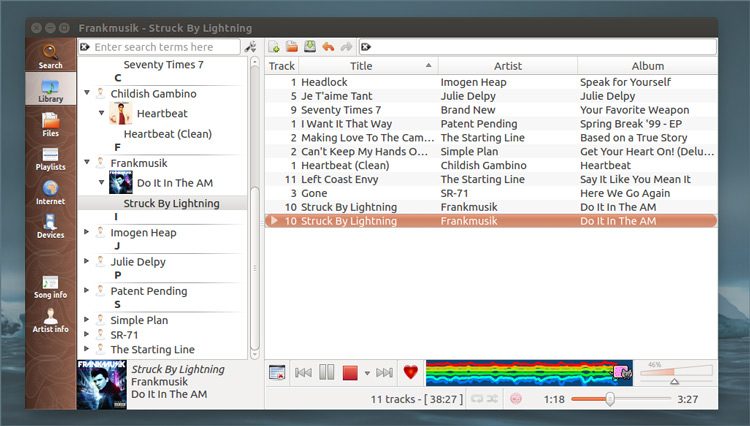 Clementine is a cross-platform music player written in Qt and is particularly popular with people who manage large music collections.

This is because the player offers tree view navigation instead of a column or “artwork” browser. If you’re the sort of person who tend to navigate (and manage) your music from a ‘files and folders‘ POV, you’ll appreciate Clementine’s approach to library management.

But there are other reasons to use Clementine, too.

The player hides a ripe amount of advanced options under its (often unwieldy) peel. Poke around the menus and you’ll find everything from a music equalizer to a built-in format conversion tool, from visualizers to support for WiiMotes, and integration with an (optional) ‘Android app’ remote control app.

Music aficionados also get built-support for viewing artist and song info, seeing song lyrics, SoundCloud integration, and… Well, you get the idea! 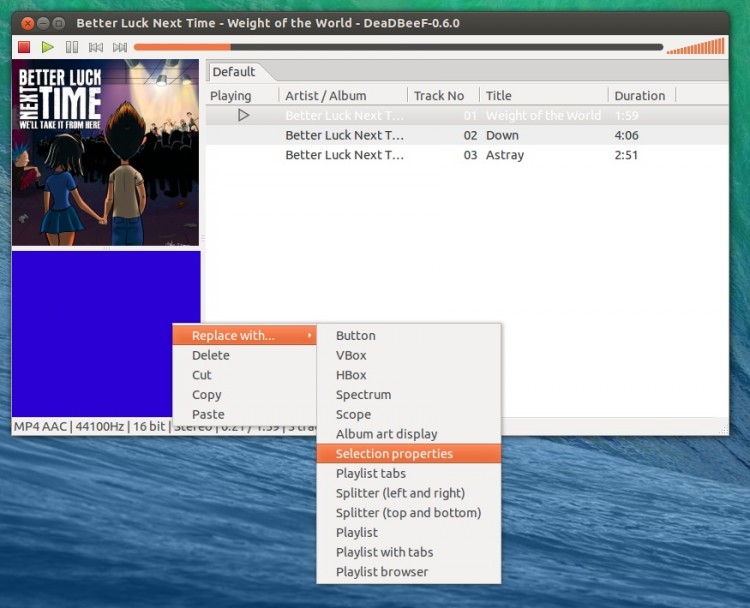 DeaDBeeF is billed as the ‘ultimate music player’, and it goes a fair way to matching the claim.

It’s generally talked of in terms of being a Linux version of the popular freeware Windows app Foobar2000, but a) I’m not familiar with that player and b) DeaDBeeF (finicky capitalisation aside) more than stands on its own.

It is very much a music player though. It eschews the overblown feature sets you’ll see in other apps and insteads favours a stripped back focus on just playing music. The app also ships without any major dependencies on GNOME or KDE, and doesn’t use a common media backend like GStreamer.

Think of it as the Punk Goes Acoustic to other player’s full studio version.

As such you won’t find built-in music management features. Instead, DeaDBeeF pivots around playlist-based listening. 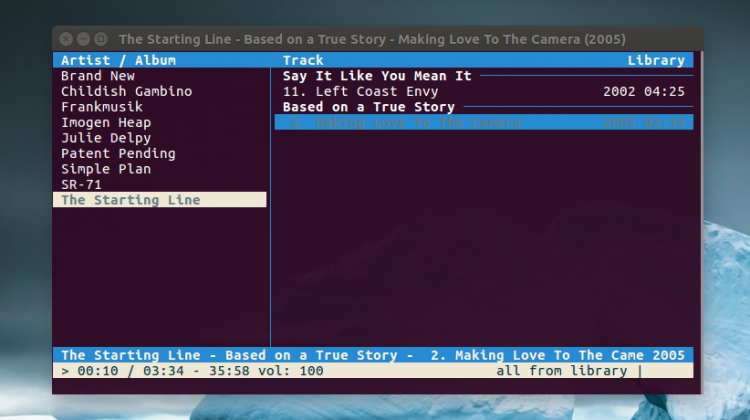 There are a stack of really cool command line music players available on Linux — the hard part is trying to pick just one to highlight here.

I could’ve gone with the (rather well known and very popular) MPD, but instead will give a shout-out to CMUS.

Cmus can handle most media formats you throw at it, and can be configured to work with a number of output sound systems, including PulseAudio, ALSA, and JACK.

The interface is pretty simple to navigate once you know a few of the core commands (see man cmus for a full intro to the app). As you’d expect, Cmus is very keyboard-centric, relying on shortcuts and text commands entirely

Other features include support for gapless playback (always a must for me), play queue and playlist filters, and even last.fm scrobbling support. Better yet it’s incredibly lightweight, using just 6MB of RAM during our hands-on. 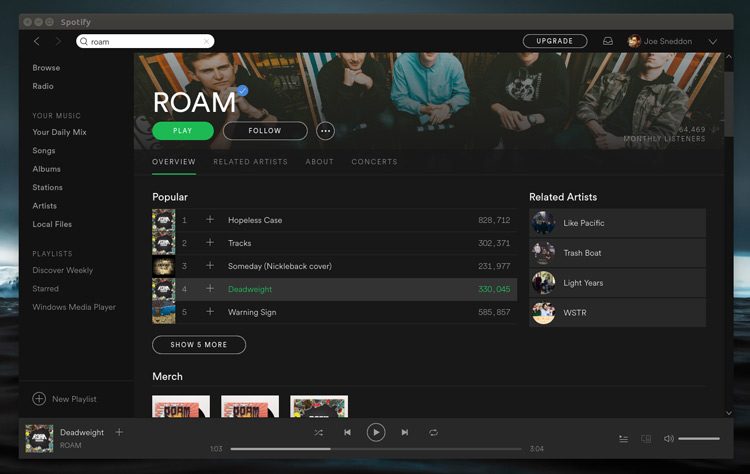 Naturally, as one of the biggest music streaming services in the world (and one which I know a great many of you use daily) we couldn’t not give a spot to Spotify.

A little known fact is that, while yes it’s a big a memory hungry, is Spotify can also play your local media files. It’s not the most perfect feature as — big, big warning so please take notice — it can totally screw up your track metadata without so much as a prompt or a whistle.

But, even for free account users, you get access to a much bigger array of music than that you (likely) have locally. Plus the Linux app is decent enough, integrates well into the Ubuntu desktop (yep, sound menu support is present) and so on.

How to install Spotify on Ubuntu 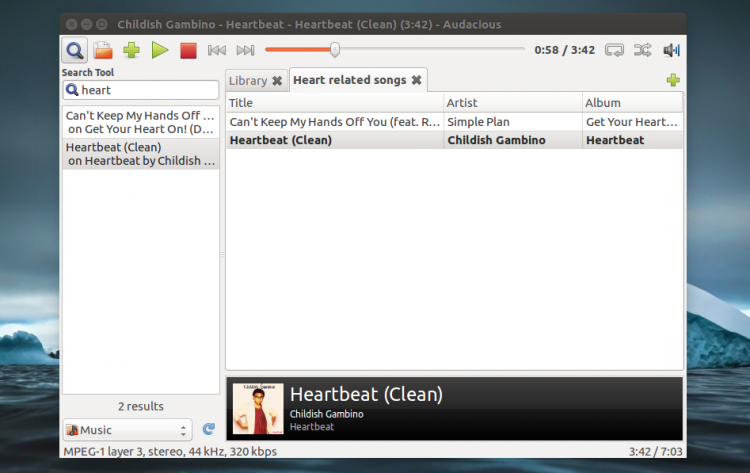 Audacious music player is part way between DeaDBeeF and Rhythmox, merging the ‘lightweight’ ethic of the former with the more management-orientated focus of the latter

It’s a player well worth poking around in, too as a number of included plugins allow you to enable additional features such as lyric fetching, equalizer, and so on.

This list isn’t intended to be comprehensive rundown, more a roundup to act as a spring board for exploring past your Linux distribution’s default music player.

A few other players worths a shout out include the Electron-based Harmony and Museeks; the Soundnode desktop Soundcloud app; Lollypop, a promising (if buggy) GTK3 music player; the feature-packed Sayanora; lightweight app Quodlibet; and Banshee, which hasn’t been updated for a 3 years but may still be worth a punt.

Let us know what your go-to Linux music player is in the comments!