Firefox support for client-side decorations (better known as CSD) is coming to its Linux app — but if you can’t live without it, we’re gonna show you how to enable it.

As we’ve mentioned before, a CSD toggle is present in nightly builds of the browser. When enabled on GTK3 desktop it merges the title bar and tab bar into one unified bar.

This gives the browser a neat, compact look, and is in keeping with other GTK3 apps that use header bars (like, basically, all of them).

Good news if you’ve wanted to enable Firefox CSD but didn’t want to switch to nightly builds: the option has filtered down to (the far less-scary) Firefox Beta.

In adding support for CSD Firefox for Linux will fall in line with the general look and feel of the Windows and macOS apps, which already makes use of space-saving header bar designs.

Not everyone is a fan of CSD (it’s be a strange world if we all agreed) so, for now, if you don’t want CSD you don’t have to; Firefox will continue to offer the option of a traditional menubar, though depending on when/if CSD is made default you may need to enable it.

To try CSD out you will need the latest Firefox beta release.

You can download Firefox beta as a standalone binary from the Mozilla Firefox website, extract the .zip, and run Firefox from the folder. This is the recommended way to try non-stable builds.

Alternatively, if you’re running Ubuntu or Linux Mint, you can download Firefox beta from the official Firefox Next PPA.

Please be aware that when you install Firefox form this PPA it will overwrite the existing, stable version of Firefox that is on your system:

Depending on how recent your beta build is it may start with CSD enabled by default. If it doesn’t you can enable CSD in Firefox beta thusly:

As you’ll see: there are rough edges with the current CSD implementation in Firefox 59 (see above), including some spacing issues with the window controls as provided by your GTK theme, and displaying neatly rounded corners.

These issues may (or may not) be fixed in future updates; part of the risk of trying things early is that you try them unfinished.

Let me know what you think about Firefox CSD in the comments below.

Dev How To beta csd Firefox 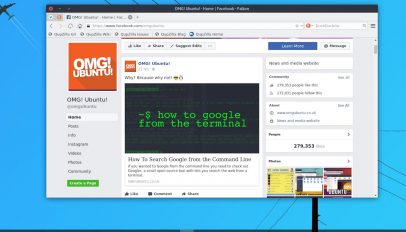 First Release of the New Falkon Web Browser
Read Next