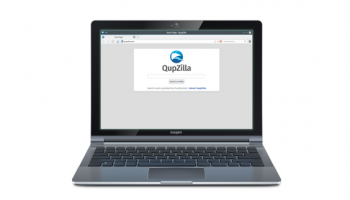 ‘Falkon’ is the new name of cross-platform Qt web-browser QupZilla.

The developer behind the Qupzilla browser announced the intention to rename the project in early august, and invited users of the browser to submit their own name suggestions.

That hunt is now over and the new name chosen.

The ‘QupZilla’ page on the KDE Incubator page already redirects to the name, and the original blog post which was used to announce the hunt for a new name is also now referencing it.

So too is QupZilla Github page, which received the following Read Me commit on Saturday:

“QupZilla was renamed to Falkon and moved to KDE infrastructure. New repository is now available at [KDE Phabricator]. This repository at GitHub will only be used for 2.2 release and after that will be made read-only.”

Yup, that’s it; no cliché, overwrought explanation on how and why the new name reflects the goals of the project, and no barely-applicable history on the etymology of the word.

QupZilla is now Falkon — not to be confused with the (seemingly abandoned) Falcon web-browser, the Falkon investment sales app, or the European Falkon festival, or the Falkon… (we get it — world).

Thanks everyone who sent this in