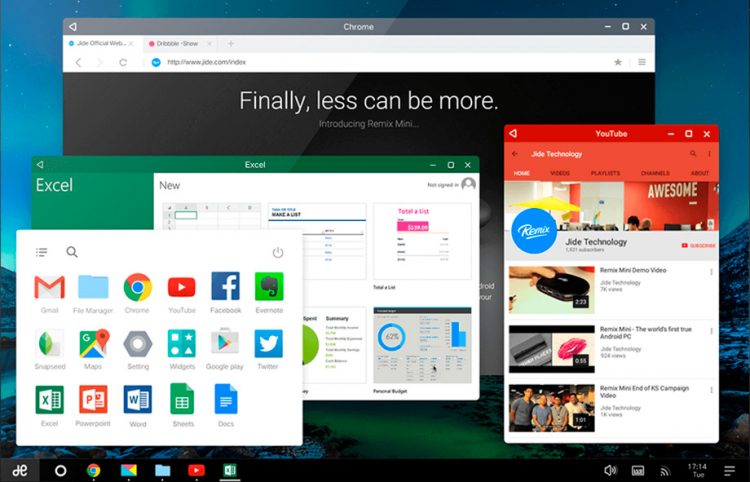 Despite plenty of hype and potential around it, today brings word that Remix OS is discontinued.

This desktop-orientated version of Android was designed to be used like a regular desktop OS and could be freely installed on Intel PCs and Macs. A variety of conventional desktop features were plumbed in to make the OS more “desktop friendly”, including a task bar, a start menu, a system tray, and the ability to run multiple Android apps in resizable windows.

Remix OS for PC, which is based on the work of the Android x86 project, also boasts full local installation, UEFI support, and (until now) OTA updates.

But it seems the project won’t migrate out of beta.

Remix OS discontinued so Jide can ‘focus on the enterprise space’

‘Pure Linux or not, it was interesting to see someone innovate in this space’

Jide is the company behind Remix OS and many of the hardware devices it ships on. It has today posted a statement (via Android Police) to explain that it is moving away from consumer market to focus ‘solely on the enterprise space’ going forward.

“We’re proud of what we’ve achieved with Remix OS and the response it’s garnered from around the world,” they say

“Over the past year, we received an increasing number of inquiries from enterprises in various industries, and began helping them build great tools for their organizations by leveraging Jide software and hardware. We see huge potential in the role that Jide can play to revolutionize how these businesses operate. And given our existing resources, we decided to focus our company efforts solely on the enterprise space moving forward.”

As part of this ‘transition away from the consumer space’ the company is ending development on Remix OS and pretty everything sold that ran it, like the crowdfunded Remix Mini PC.

While this is disappointing — pure Linux or not, it was interesting to see someone innovate in this space — its base, Android x86, isn’t going any where.

That should be of comfort to those who you who, like me, regularly need to scratch the Android-as-desktop-OS itch.