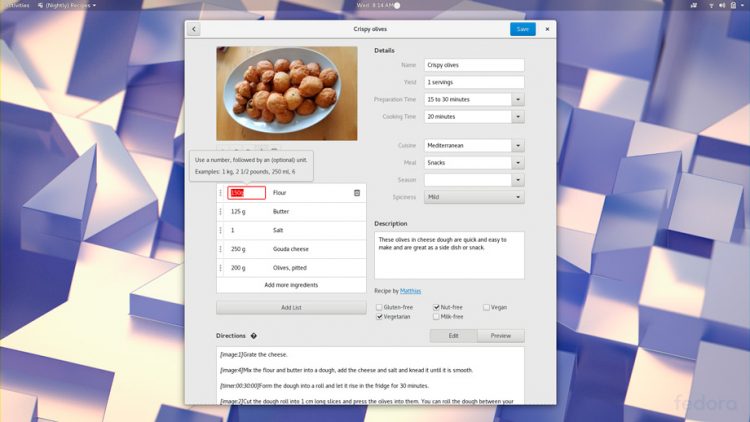 GNOME Recipes, the desktop cookery app for Linux, snags a spot of seasoning for its upcoming stable release.

GNOME’s Mathias Clasen serves up an update on his blog today in which he lists a couple of features that food lovers among you will enjoy.

Among them is inline editing of ingredients, replete with auto-completion for units and ingredients.

Rounding out the latest batch of improvements is the ability to sort lists of recipes based on their ‘recency’ (that is how new they are) or by their name (which is presumably great if you like cooking with apples, aniseed and aubergines).

If news of these improvements has left you hungry, you can satisfy your hunger by installing the current stable release, v3.24, on Ubuntu 17.04 from the Ubuntu Software app.

As someone who rarely eats — and even then only eats pre-prepared food — I’ve zero idea why I appear to have such a fixation for this app. It could be a subconscious “if only I was into eating better” thing, or it could be the somewhat niche appeal of this app appeals to my love of ‘apps that do one thing well‘.

On a side note, notice the wallpaper in the screenshot above? It’s the new GNOME 3.26 wallpaper — and it’s not to everyone’s tastes…

Home » Dev » GNOME Recipes 3.26 Cooks Up a Batch of Improvements