Developers and Ubuntu enthusiasts are being encouraged to help test the improved version of the Ubuntu Ambiance theme.

As revealed in our interview with the Ubuntu Desktop team, Ubuntu 17.10 won’t ship with a new desktop theme — well, not a new new theme. The plan is to use the current Ambiance GTK theme (which was first introduced in Ubuntu 10.04 LTS, fact fans) by default, albeit with some visual spit and polish so bring it up to scratch on the GNOME desktop.

If you read this site regularly you’ll already be aware of this work. We wrote about the improvements earlier in the month, and recently showed you how to install the ‘fixed’ Ambiance theme on Ubuntu 16.10 and 17.04. The gif above shows the main differences, including rounded corners, window drop shadows, and improved spacing of elements within the CSD.

Canonical’s Marco Trevisan, who made a call for wider testing this week, explains: “One important aspect [of Ubuntu is] the visual appearance, and the Ubuntu Desktop team has decided that the default themes for Ubuntu 17.10 will continue to be the ones you always loved! Right now some work is being done to make sure Ambiance and Radiance look and work good in GNOME Shell,” he says.

“This is already quite an improvement, but we can’t fix bugs we don’t know about… So this is where you can help make Ubuntu better,” he adds.

How to Help Test Ambiance (and Radiance)

So how does one actually help test the new and improved Ambiance (or Radiance)? Why by using it of course!

Marco recommends volunteers toy around in the latest Ubuntu 17.10 daily builds, but you don’t actually have to go that far if you don’t want to.

Install GNOME Shell on Ubuntu 17.04, then manually install the latest version of the improved Ambiance theme (see below) and then switch to it/apply it using GNOME Tweak Tool.

If you’re running Ubuntu 16.10 or 17.04 you can download the light themes installer package below. Keep in mind that this is from an in-development version of Ubuntu, which means it itself is a ‘development’ snapshot.

When you encounter a bug, poorly themed widget or element, and so on just pop open a new Terminal window and run:

Be sure to attach a screenshot so that developers can see what needs to be fixed. 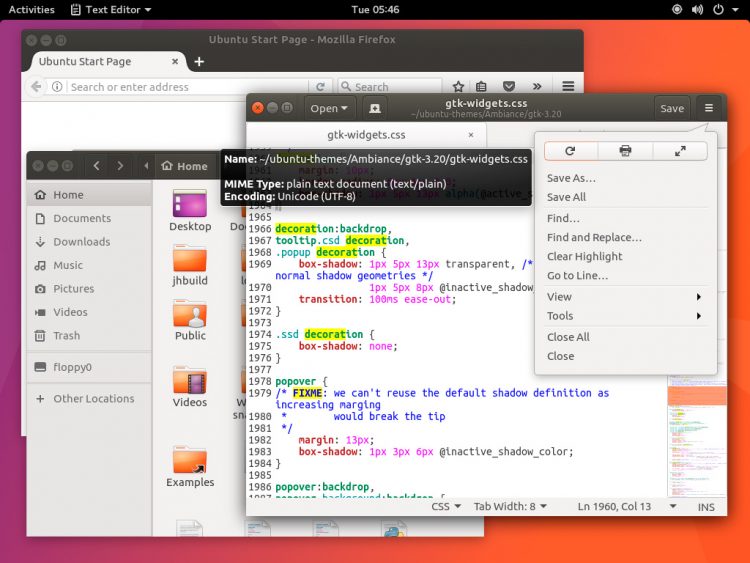 If you’re a web developer you can even get involved with tweaking the theme too. As Marco points out, Gtk themes use CSS these days.

“All you have to do, is simply use the Gtk Inspector that can be launched from any Gtk3 app, and write some CSS rules and see how they get applied on the fly. Once you’re happy with your solution, you can just create a [merge proposal] for the Ubuntu Themes [on Launchpad]”.