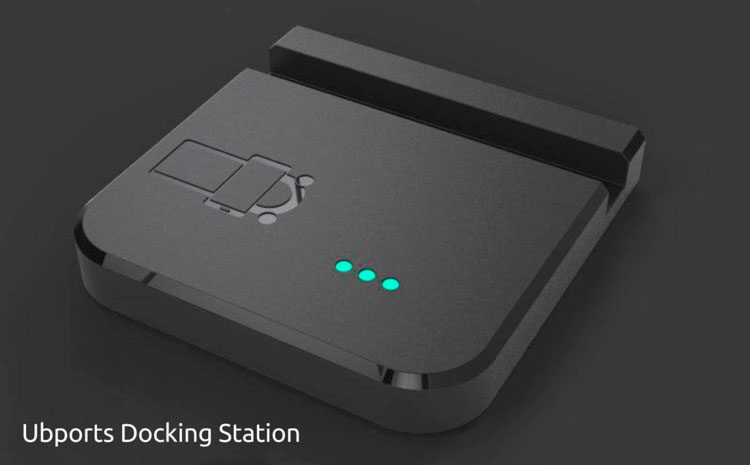 You’re looking at a proposed new 3D dock that, its creator hopes, will help bring Ubuntu convergence to more people.

The device is called the ‘Station Dock’ and it’s the brainchild of Marius Gripsgård, the chief developer behind the community-based Ubports project.

Sadly no prototype was available for attendees to the recent UbuCon summit held in Essen, Germany, to handle. Not all was lost as the chief developer behind community Ubuntu Touch ports such as that for the Fairphone 2 was there in person to announce the project.

The Station Dock is, effectively, a smart dock for smartphones. It features 2x USB, a single HDMI out and an audio jack (no courage, eh?).

The device “runs a really small version of Linux inside” that will handle a direct passthrough to USB [via USB OTG]”  The task of the small single-board computer inside the plastic housing is ‘to decompress the images that come from the phone [over Miracast] and deliver the decoded image through cabled HDMI.’

This, in effect, circumvents the lack of MHL and Slimport display features in the current crop of Ubuntu Phones (though still requires them to support Aethercast).

Casting a display over Wi-Fi introduces latency. This might not be hugely noticeable when viewing photos or even videos, but it can create a jarring sensation when using it to interact with a desktop environment (you expect menus to appear instantly, etc).

“With this process there is no lag,” he says. “It’s [almost] like a direct HDMI cable. Place the device down: it charges, it has direct to HDMI; it’s already connected to [USB hub with mouse and keyboard].”

Miracast is still required (sorry Bq Aquaris owners) but only to the dock. This reduces latency, as the dock handles decoding of the display and pumps it out over the HDMI.

Not Only For Ubuntu Touch

“It’s not only for Ubuntu Touch,” says Marius. “It’s also for Android,

Why also Android? Well, Marius doesn’t feel that the Kickstarter campaign would be successful without it.

“We don’t have a community enough (sic) to generate that amount of income needed to produce this. The software isn’t the problem here. The problem is getting the money to mass-produce it.”

With projects like Maru OS, which let you run a full-Linux desktop from an Android smartphone, the dock could prove a killer lure in the kickstarter stakes.

Marius isn’t oblivious to the hurdles ahead, noting that:  “Hardware is hard. It’s really hard. I’m really stepping into an area I’ve never really been in before, so I would need help [in getting] right connections in China. [The money also] hire someone… hire myself full-time… we will try our best to risk this.”

“Ubuntu Touch badly needs this now before it’s dying (sic). Devices are not selling any more. There is the Bq tablet and it’s not a phone… it’s not convergence… the goal here is phones.”

If the Kickstarter isn’t successful the dock could still be built using a standard Raspberry Pi and some custom-made casing.

You can watch the full talk on the dock in the video below, starting at the 50 minute mark:

2 Handy ‘Places’ Indicators for the Ubuntu Unity Desktop
Read Next