The Cinnamon desktop environment is incredibly popular, and for good reason. Out of the box it offers a clean, fast and well configured desktop experience.

But that doesn’t mean that you can’t make it a little better with a few nifty extras.

In this post I’ve rounded up four of my favourite Cinnamon applets. They’re ones that help improve the basic Cinnamon experience, or add to it in a different way.

If you’re the sort of person who has multiple application shortcuts scattered on your desktop then this first applet is a must.

The functionally named Desktop Icon Size applet lets you quickly change the size, position and layout of app icons on the Cinnamon desktop.

Along with precise icon sizing you also get control over margins, grid size, and even the angle of shortcuts. The applet includes 5 different layouts (or ‘spreads’, if you rather) including vertical, horizontal and (uniquely) round.

There are plenty more options included, including controls to customise icon order and the ability to save and switch between multiple profiles.

No matter which desktop environment I use I inevitably end up adding some sort of weather monitoring/forecast app or utility to it.

Cinnamon, like GNOME Shell, isn’t short of metrological candidates. For me the simply named ‘Weather‘ is by far the best. It can display the current local weather conditions and temperature in the panel. When clicked it shows greater detail, including humidity and wind speed, as well as a brief forecast.

The app requires you to enter the WOEID (“Where On Earth ID“) for the location whose weather you wish to monitor. You can find a WOEID using various online tools. 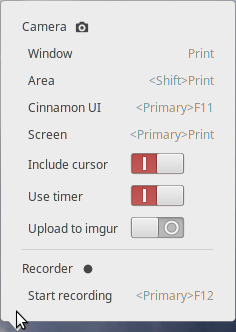 When you want to record a quick screencast or take a snap of your desktop to share, try Desktop Capture.

It’s billed as a “comprehensive screenshot and screen casting applet for Cinnamon” and, based on appearances, it really does seem to be exactly that.

Like other fully-fledged screenshot tools this applet is able to snap either full screen, app window, custom area or Cinnamon UI elements using its own, built-in screenshot/recording tool or using an alternative one installed on your system, e.g., GNOME Screenshot, Shutter, etc. 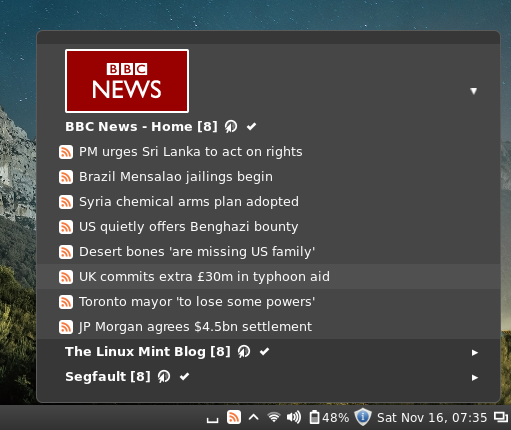 If you’re a big RSS feed reader then you probably use a dedicated desktop app or web service. But if you only tend to check on a handful of sites you may find the News Feed Reader applet a decent alternative.

If you need a site to get started with you can add our RSS feed address: omgubuntu.co.uk/feed!

Do you use applets on the Cinnamon desktop? Which do you find invaluable? Let us know in the comments section below!