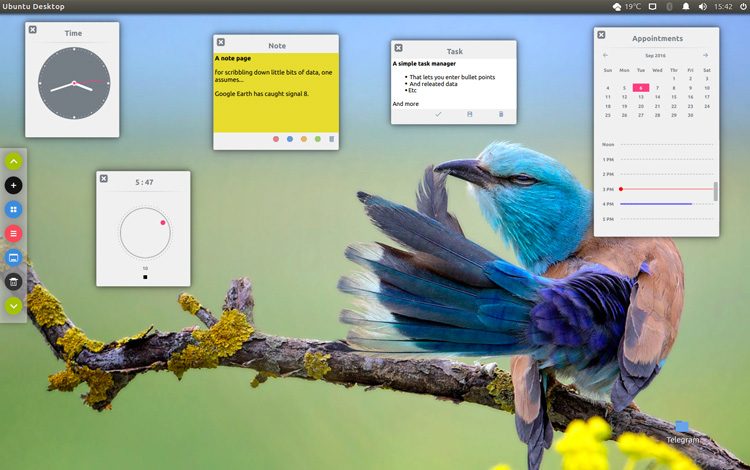 If I asked you about Plexydesk you’d probably look at me blankly.

Curious as to what became of it I went on a Google today. It only took a few characters strokes to discover that the project is still very much alive.

In fact, it’s looking better than ever!

Desktop Widgets For Any Linux Desktop

Plexydesk describes itself as a “productivity suite” that supports Windows, macOS and Linux.

In layman’s terms it’s a widget engine, a platform for running small, single-purpose QML and HTML “gadgets” on your desktop.

Plexydesk is developed ‘entirely with open source components and frameworks’, including Qt5, QML, C++ and HTML.

The project says it is built to be light on resources but without impacting performance.

It also works with Ubuntu’s Unity desktop, but because the Plexydesk ‘dock’ is fixed to the left-hand side you’ll need to move the Unity launcher to the bottom of the screen or set it to autohide to access it.

You can use Plexydesk as a replacement “desktop”, and even set a custom wallpaper for it. As it runs underneath all normal app windows, the Unity launcher, etc. you can work without distraction.

I think the app is most useful in “seamless mode“.

Seamless mode floats Plexydesk widgets over your regular desktop background. The upside to this is that you can continue to see your desktop wallpaper, and any desktop folders, files or launchers you have there. The bad news is that you can’t click ‘through’ to get at them.

Plexydesk supports multiple widget workspaces/desktops. You can add as many widget spaces as you like (e.g., a space for notes, a space for calendar and clock, etc.) and quickly switch between them using the page steppers on the left-hand dock, or by clicking the expose button to open a thumbnail view. 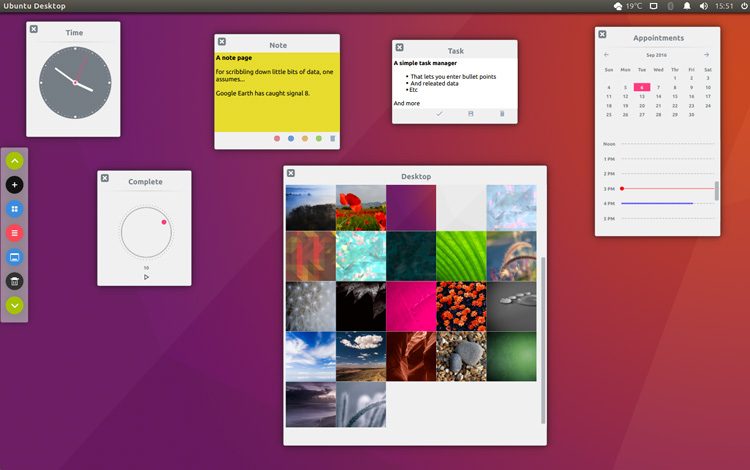 Only a small set of “widgets” are included in the currently v1.2 release, including:

These widgets don’t render entirely as they should. Some icons don’t appear, leaving you with no idea that there are extras options and tools available.

There are plans for more widgets, and third-party developers are encouraged to get involved in extending and building for Plexydesk. Personally, I’d love to see some sort of system resource usage widget, maybe a weather one too!

I’m not here to champion this as anything other than what it is. It’s for you to decide if Plexydesk is better than Conky, Screenlets, Desklets or any of the other popular ‘cover your desktop in glittery stats and stuff‘ projects that exist.

Plexydesk 1.0 is available to install on Ubuntu 16.04 LTS, using the Plexydesk team PPA.

To add it open a new terminal (Ctrl + Alt + t) and run the following two commands.

After you have installed the app from the PPA above you can go head and open it. The question is how. For some reason it doesn’t register a .desktop launcher. So, to open Plexydesk on Ubuntu, press Alt + F2 and enter ‘plexydesk‘ (minus quotes) and hit return.

Plexydesk will launch in desktop mode by default (you’ll see a big blue space with a logo). Right-click anywhere on this widget space to bring up the options controller. 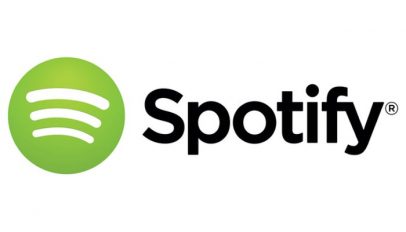