“What theme is that? What icon set is in the screenshot?” — these two questions are taking on meme-like status in our comments section.

But you’re not not in on the joke. It seems that, actually, a lot of people are genuinely asking which theme and icon set I use on my Ubuntu desktop.

They just happen to be asking a lot.

This is despite writing about an update to the Papirus icon theme earlier this week, and sharing word that Ubuntu 16.10 makes the Arc GTK theme available to install from the archives.

Rather than continue to transpose links to and from our archives to previously written posts I figured I could  write a single post with all the pertinent details in, and just link to that. 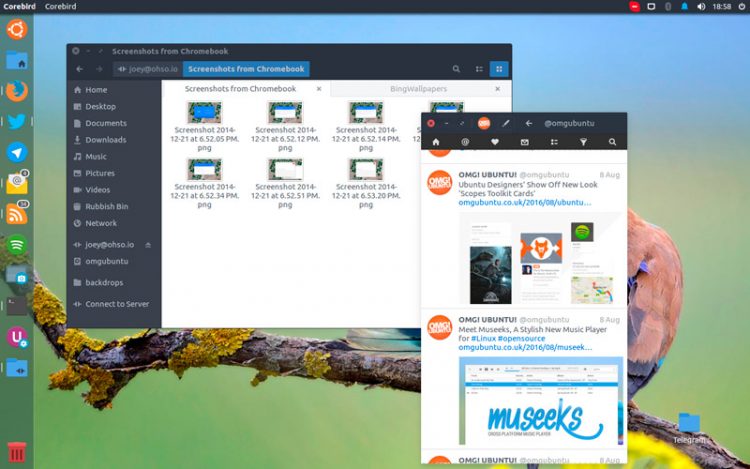 This is my Ubuntu desktop. It’s the exact same one that has been staring out at you in screenshots throughout posts I’ve written these past few weeks.

It’s a pretty vanilla install. So vanilla, in fact, that it’s easy to make your Ubuntu desktop look like mine.

The main ingredient is the Arc GTK theme suite.

Arc Darker is actually mix of the light and dark themes, and is the one that I use on my desktop. It gives you dark window borders and sidebars, but light app backgrounds.

We’ve shown you how to install Arc GTK theme on Ubuntu before. If you don’t fancy following that tutorial you can download the Arc GTK theme from the theme designer’s personal repository by clicking the button below:

Once you have downloaded the Arc theme installer you will need to install it. On Ubuntu, just double-click on the downloaded package and follow the on-screen instructions.

To change GTK theme on Ubuntu you need to install a third-party tool. We’re big, big fans of Unity Tweak Tool in particular, as it lets you configure, tweak and fine-tune virtually every part of the Unity desktop.

Unity Tweak Tool is available to install for free from Ubuntu Software:

When both the Arc theme and the Unity tweak tool are installed you’re ready to switch yout GTK theme to Arc:

Find ‘Arc Darker’ in the list and select it. The theme will be applied instantly so that you can preview the results. If you like what you see exit the app.

If you don’t think the look is for you simply select a different theme from the list. Click ‘Restore Defaults’ to go back to Ubuntu’s default theme.

With the Arc theme installed it’s time to tackle the icons.

The Papirus icon set has its own PPA, which makes it super-easy to install.

Select ‘Papirus’ from the list. The icon theme is applied instantly.

If you like what you see, exit the app.

If you don’t think the look is for you simply tap the ‘Restore Defaults‘ button at the bottom of the window to revert to Ubuntu’s default theme.

The final step is to change the BFB icon in the Unity launcher to the Ubuntu logo.

You can, in theory, use absolutely any icon you like. I use the Papirus icon theme’s Ubuntu distro logo from /usr/share/icons/Papirus-GTK/48x48/places/distributor-logo-ubuntu.svg

Make a copy of the icon you wish to use on your desktop and rename it ‘launcher_bfb.svg‘.

Now, copy the newly named icon to /usr/share/themes/Arc-Darker/unity (assuming this is the theme you’re using, and as this is a system folder you’ll need to be root to move the icon into the directory).

Want even more Arc goodness on your desktop? Check out our Arc-ives!