Canonical say businesses who switch to Ubuntu could save as much as 70 percent versus the cost of upgrading to Windows 10.

In a blog post titled ‘Windows 10: Is it finally time to migrate to Ubuntu?‘, the company posit that sticking with Windows would be the ‘comfortable next move’ for businesses to make – but not necessarily the ‘best choice’.

Migrating to Ubuntu could reduce ‘royalty, maintenance and training costs for users’ by up to 70 percent

Migrating to Ubuntu could reduce “royalty, maintenance and training costs for users” by up to 70 percent, Canonical claim, and say the “[…] the heavy resource constraints on devices and meatier royalty fees have turned off even the most fervent Windows followers.”

“This is probably the best possible time to take a closer look at other choices.”

Time Is Ripe For Alternatives

The good news for Canonical is they’re not alone in upping the ante in the face of a resurgent Microsoft.

Dell has unveiled a brand new Chromebook that has been designed specifically to meet the needs of business, with feedback shaping both the hardware and software. Industry analysts are also expecting to see increased uptake of Chrome OS by businesses, especially as more mission critical tasks are offloaded to the cloud and legacy needs are handled by virtualization. Chromebook’s inherent security also

All areas where Ubuntu has plenty to offer, too.

Microsoft this week announced that Windows 10 is now running on more 75 million PCs around the world, though it did not divulge how many are home users versus businesses.

In 2011 Canonical announced its goal was to have more than 200 million Ubuntu users by 2015. The recent launch of Ubuntu Snappy and Ubuntu for phones make that goal sound more plausible today than it did four years ago.

A handful of businesses opting to bypass Windows 10 in favour of Ubuntu? Well, it won’t help hit that goal overnight but it certainly wouldn’t hurt.

But based on data from industry firm Gartner, who say businesses are “interested in going ahead with Windows 10 in much bigger numbers than we saw with Windows 7 six years ago”, it may take more than a blog post to win ’em over.

It’s important to note that the blog post in question is not targeted at home users, for whom the vast majority are eligible for a free in-place upgrade to Windows 10 and have few (if any) support or licensing considerations. 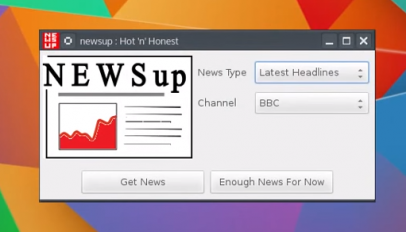 Newsup Is a Unique News Reader App for Linux
Read Next