In just a few short years native Twitter clients for the Linux desktop have become an endangered species.

Corebird is one of the few remaining desktop Twitter apps still in active development for Linux, making its latest release all the more special.

Distributed as source, and focused solely on the GNOME 3 stack, Corebird isn’t the easiest app to find in the aviary. But as its latest release shows, it is fast becoming one of the best.

Switching between multiple accounts is easier in Corebird 0.9. A quick click on the avatar of an active account will show a menu of all available accounts and a link to add a new one. A further click lets you switch to, configure or open them up in a new window. 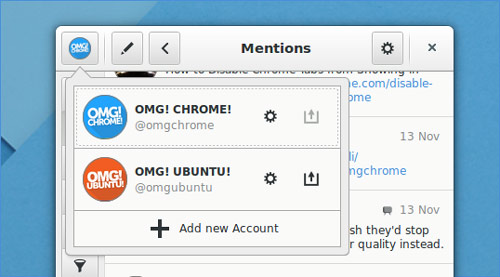 The compose box now highlights @mentions, #hashtags and links as you type. This makes it easier to spot a mistake, but also gauge the overall context of your tweet as it’ll appear in others’ timelines. 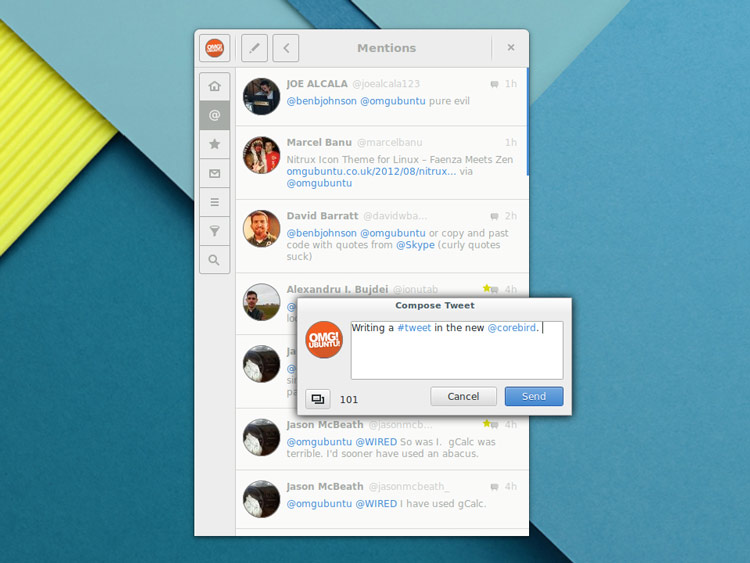 The developer still doesn’t plan on supporting any sort of URL shortening service, arguing that being able to see the full link is better security practice. A quick copy/paste from a site like Goo.gl will see you right, however.

Twitter added support for multiple image uploads and .gif images earlier in the year, something that Corebird now takes advantage of. Multiple images appear inline and can be navigated using your keyboard’s arrow keys, while Vines and gifs can be viewed in-app, too.

Finally, but by far the most commendable change, is the hugely improved interface and user experience. 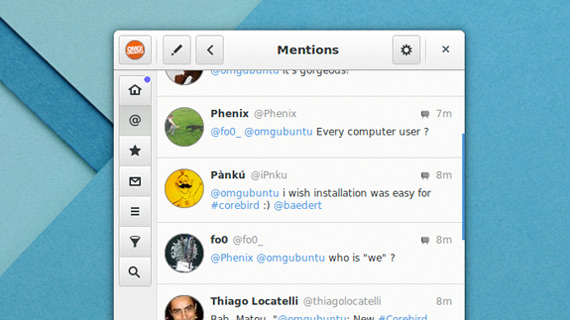 Corebird 0.8 was a great effort but did look a little rough around the edges. Improved spacing, smaller icons and better use of dialogs and in-app widgets (such as ‘load older tweets’) sees the 0.9 release make a polished and impressive first impression.

All windows now feature a back button. This makes navigating away from a profile or back out of a conversation a sane, predictable affair. Settings and filters are now applied instantly, too. Additionally, verified accounts are denoted by a tick emblem in the timeline – no more needing to click through to check!

Other features of Corebird, not necessarily exclusive to this release, include profile editing, header image uploads, muting and filtering of tweets and robust in-app searching.

What I find particularly encouraging about Corebird is that it shows desktop app development for Linux is not dead. It’s simply moved on to more interesting, innovative and sure-footed platforms like GNOME, elementary and Linux Mint.

Don’t misunderstand me; developers are continuing to target Ubuntu. But few do so with Ubuntu integration, much less exclusivity, in mind.

Being at the helm of this site for over five years gives me a unique vantage point. The days of new Indicator Applets arriving daily, devs clamouring to add Unity Launcher integration to their wares, and innovative third-party Scopes for the desktop are well and truly behind us.

The lack of fervour is understandable. The Ubuntu Software Center is all but abandoned. Some developers have even pulled their apps from it, claiming that pending updates and fixes are not being pushed to users.

‘Ubuntu has to pull forward. This uncanny valley we’re in is a necessary creation of that.’

Canonical’s focus on mobile, with HTML5 apps, Qt/Qml and an entirely different UI paradigm, API set and so on, creates an uncertainty for long-time ‘desktop app’ developers. Feed that into the general malaise about what Ubuntu now is and where it’s going and it’s no surprise to see devs switching to firmer ground and distros with more momentum.

Not that any of the above is a criticism, of course. Ubuntu has to pull forward, and this uncanny valley we’re in is a necessary side effect of that. I’ve no doubt that as soon as Unity 8 debuts on the desktop in a manner that developers can target (with some degree of predictability) things will change.

But for now, especially as a site that has apps as part of its bread and butter, the most interesting stuff is happening elsewhere. These apps may not work as great on Ubuntu as they do on their respective desktops or shells, but the beauty of Linux is that they will run.

Musing over, on to installation.

Now for the crumby bit: installing Corebird 0.9.x in Ubuntu is a hassle.

There is no official PPA, only source packages. Installing it from source isn’t hard if you’re used to it, but remains far from being as simple as downloading and installing a .deb. You also need to be running Ubuntu 14.10 or later.

Update: You can also try .deb packages for Ubuntu that are compiled by Sebastien Noel.

For more information you can flap on over to the official website, where source links and compilation instructions reside.