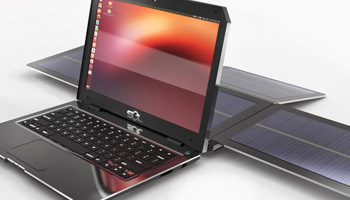 Well, smoke me a kipper, I’ll be back for breakfast! Remember that solar-powered Ubuntu laptop we wrote about last year?

You know, the one that looked like vapourware? Well, it’s finally emerged from the haze.

After months of missed deadlines, bizarre offers of free devices to anyone pointing out typos on their website and a handful of photos that had more than a faint whiff of ‘that’s a toy at a clever angle, right?’, the ‘Sol’ solar laptop, which runs Ubuntu 12.04 LTS, is gearing up for a North American release.

<cynic> Hopefully this one happens. </cynic>

Ahead of its US arrival, tech site Engadget was given an advance hands-on with the device. In a ‘review’ published today they come to the conclusion that, er, their review won’t mean much since the beta unit they were sent has a different CPU, GPU and battery.

In reviewing what they were sent, a bulky 6.6lbs device with detachable solar array that charges a battery good for 2.5 hours, Engadget notes of the performance:

“The laptop worked fine with my WiFi connection, but lagged considerably while I was browsing the internet, especially when I was loading YouTube videos. It also crawled while I was using the pre-installed LibreOffice apps and generally stuttered too much to pass muster as my main workhorse.”

WeWi, the Canadian company behind the device say it will have a faster processor and a battery life of 7 hours. This will be needed with a resource intensive UI like Unity.

Aside from the specification differential, and overlooking the obsessively precise panel positioning requirements — “the best way to position the array is to have it directly face the sun in the horizon in the middle of the day” — the Sol laptop does offer a lot of inventiveness for its ~$500 price tag.

Sol isn’t aimed at the likes of you and I, people looking to get stuff done, tweet and play World of Goo. It’s a tool for field scientists, explorers and military bods. The price point also puts it within reach of the more affluent among developing nations, too.

Head on over to Engadget for more details, photos and hands-on impressions.