If you’ve used a recent release of Ubuntu’s Unity desktop then you’ll know that opening apps, files and folders from the Dash requires nothing more than a left-click

But in Ubuntu 13.10 that behaviour has changed. And it’s a little annoying.

“Both left and right clicking in the Dash will open the Preview.”

Over in Ubuntu development land a recent change in Dash behaviour has ticked off a handful of testers.

Left-clicking on an app icon or search result in the Dash no longer opens that item instantly. Instead, a Unity Preview of the item unfolds.

Unity Previews, introduced a few releases back, and previously opened by right-clicking on a result tile, offer up snippets of information, larger thumbnails, and context-specific ‘actions’ such as ‘install app’; ‘send via e-mail’ or ‘set as wallpaper’.

But in Ubuntu 13.10 both left and right clicking on an item in the Dash will open the Preview, where a ‘Launch’ action is available.

Applications and folders can still be opened instantly from the Dash by double-clicking on a result tile.

One assumes that this change has two main motivations behind it:

It’s possible that user testing of Previews has shown that they are hard to discover. Think about it: how many people are likely to right-click on a result tile if left-clicking – aka ‘the norm ‘- does what they expect?

With 13.10 bringing a barrage of web results into the Dash the Previews feature really comes into its own, so making them default is a smart, if annoying, move.

For example, Chuck Hamtowski searches for ‘hamsters’ in the Dash. He sees an app result – ‘Hamster TIme Tracker‘ – an image – Hamster-In-A-Wheel.jpg – and, with the Smart Scopes Service enabled, a variety of Hamster related web results, including music and reference items, are also shown.

If this was Ubuntu 13.04 then clicking on any result would see the Dash close and the application/file open.

With Smart Scopes this would mean that clicking on the hamster thumbnail for the Wikipedia result would open his browser.

“But I thought it was a picture! Why has Firefox opened?” Chuck would say.

Showing Chuck a Preview – a snippet of useful information from which to make a decision on – rather than shunting him out of the Dash – is by far the better option. This way he remains where he is; he can see what the item is about; and, if it’s what he’s looking for he can opt to ‘View’ it in his browser.

It Can Be Disabled

This early on in Ubuntu 13.10’s development it’s best to assume that this change isn’t set in stone. It may only be a trial to see how well it works in the grand scheme of Unity’s user experience.

If you find the change really annoying you can disable it via the Dconf editor tool:

Have you used Ubuntu 13.10 recently? What do you think of this change? 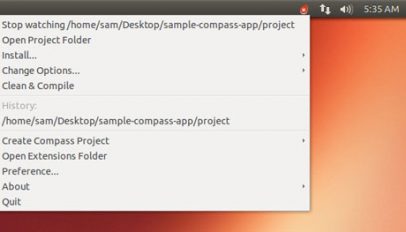 How To Install Compass.app on Ubuntu
Read Next