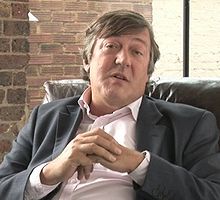 Stephen Fry is more than just a a revered actor, writer and comedian: he’s also an Ubuntu user.

The actor revealed his choice of Linux distro in a pre-recorded interview for the OggCamp 12 event, held last week in Liverpool, UK.

‘Ubuntu Is The Friendliest’

Asked whether or not he used Linux on any of his devices Fry replied:

Do I use Linux on any of my devices? Yes – I use Ubuntu these-days; it seems the friendliest.

Fry’s choice of Linux distro won’t come as a surprise to many who are familiar with the actor’s views on copyright, and digital culture. He has long been a vocal advocate of the open-source philosophy, famously staring in an online video to celebrate the 10th birthday of GNU/Linux.

But Linux is not his only love when it comes to technology.  The ‘Hobbit’ actor is also a well known fan of Apple. In the interview with OggCamp he touches on the ‘worry’ he has over the ‘walled garden’ approach the company are taking:

Alongside his OS choice, Fry talked about his journey with computers – from his first BBC Micro, and early dabbles in programming; to why he feels the uptake of Linux has been somewhat slow.

The full 16 minute interview with Stephen Fry  can be found below.