The last few weeks have seen a flurry of activity surrounding Unity 3D (the game engine, not the desktop).

Most prominent amongst this is the beta release of Unity 4 – the next iteration of the games development tool – which was announced at the annual Unite conference last week.

Canonical were also in attendance to show developers how ‘easily’ games developers can publish their titles on Ubuntu.

Unity 4 is notable for a number of reasons, but the one most relevant to a site like this is that it brings Linux support.

And unlike similar instances where ‘support’ means ‘effort’, developers crafting games in Unity can ‘port’ their game to Linux with a few clicks. The result is a standalone executable file that can be easily run on most Linux distributions.

No compiling; no source; no PPAs.

The addition of Linux support in Unity 4 adds weight to its ‘author once, deploy everywhere” slogan. Supported platforms include the Windows, Mac and Linux, Android, iOS and, most recently, Windows Phone 8.

For a list of games made with Unity check out the official site’s gallery @ unity3d.com/gallery/made-with-unity/game-list 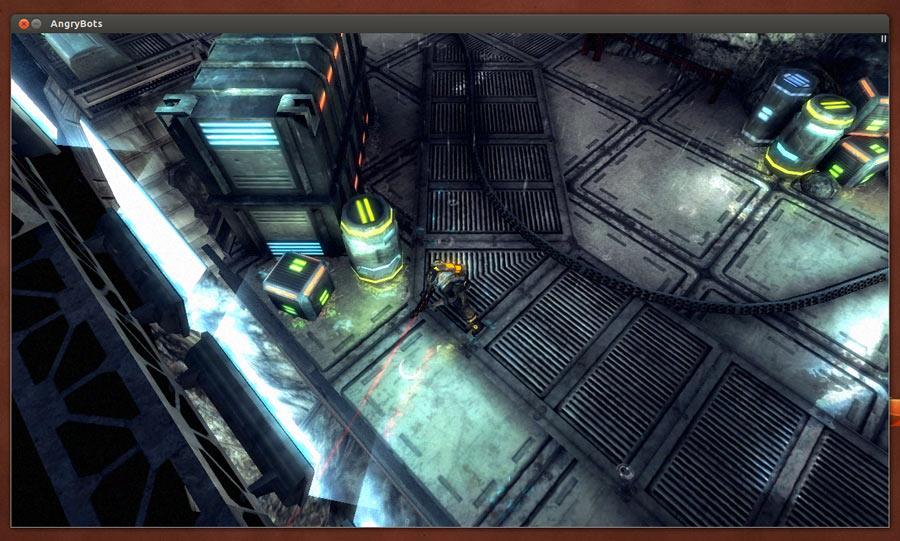 Now, chances are you’re not a developer making games with Unity. But that doesn’t mean you have to wait before you can try a Unity 4 Linux title for yourself: two developers have packaged up early versions of their work specifically for testing on Linux.

AngryBots (as seen in the screenshot above) is the most impressive of the two games. It’s only three levels long (there is no ‘full version’ of the game), but the visuals and gameplay are impressive.

Okay, i’m sort-of lying about the gameplay. The Linux version has control issues, but having played it on Android I do hope that an update fixes the issue.

Unitroids is a remake of those old ‘Astroids’ style games found in arcades (and on early mobile phones!).  Yes the graphics aren’t all that but as this entire title was made solely to test for breakages in Unity, it can be forgiven.

To try the games for yourself download the .zips files from the links below, extract, then double-click on the executable inside the folder. See this forum thread for further details/updates.

Home » Download » 2 ‘Unity for Linux’ Games Made Available for Demo