Unity Glass is a third-party “tweak” for Unity’s Launcher tiles that can add a refined new look to your desktop.

It replaces the default ‘square’ image tiles using by Unity with rounder versions that are in keeping with the shape of the BFB.

If you can’t spot the difference in the screenshot below then you won’t benefit from applying this tweak. 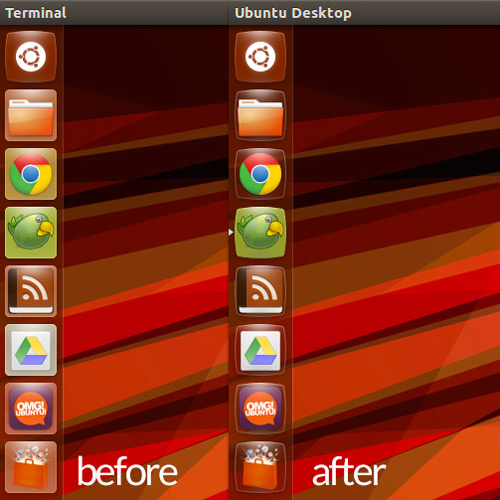 Unity Glass is the work of Ivan Sauza, and packaged by a Spanish Ubuntu blog (link since broken) for easy installation.

Unity Glass is a third-party tweak so you won’t find it available in the Ubuntu Software Center.

Instead you will need to use a pre-packaged .Deb installer.

This package modifies system files. Use with caution.

The package overwrites the artwork used to draw various elements of the Unity launcher with tweaked versions; Unity Glass is not a separate launcher, or a theme that can be switched on and off as you like.

Download the .Deb file linked above to your computer. Once finished you can install the package by double-clicking on it, taking care to follow any prompts that appear on the screen after this.

When installation has completed you will need log out and back in before the changes take effects.

For the optimum effect change the Launcher backlight settings to ‘Active Icons on’ using a tool such as ‘MyUnity‘.

If, after installing, you wish to “undo” the changes you will to reinstall Unity via the command line like so: –

Will the Ubuntu Phone OS Look This Good?
Read Next