Google Docs is a great and capable office suite, but its browser-bound nature puts many users off of using it as a full-on LibreOffice replacement.

Google have recently announced offline support for the web-based suite, but for many this still won’t be entirely ideal.

So enter GWOffice – a desktop-based Google Docs editor that is in development as part of the Ubuntu App Showdown.

GWOffice lets you create new text, spreadsheet and presentation documents, as well as edit those you have already created and saved in your Google Drive, straight from your desktop; no web browser window needed.

Admittedly you’re still using a web app, but GWoffice tries hard to disguise this by theming Google Docs with Ubuntu-style colours, and integrating the Google Docs menu into the App Menu.

If there is any criticism to be levelled at the application it would be its use of elementary-style interface elements. Whilst these are nice to look at, and super nice under elementary’s Pantheon desktop, they do foster a visual ‘break’ from the rest of Ubuntu.

Even the most simple of things, like the placement of ‘close’ on the document tabs (placed to the far right in Firefox, Chrome, Nautilus, Gedit, etc), adhere to elementary’s guidelines. 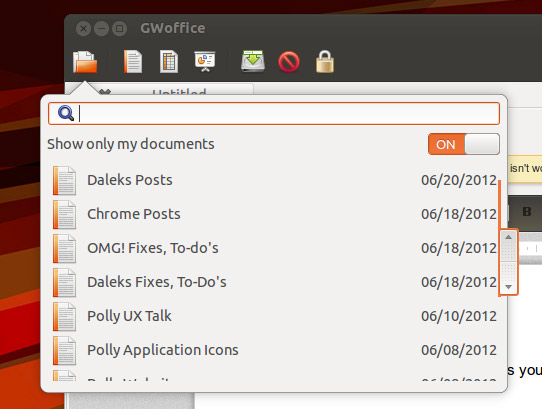 This results in, somewhat ironically, parts of GWoffice looking almost as ‘un-native’ in Ubuntu as Google Docs does in the browser.

But it’s not all bad.

GWoffice makes fine use of other Ubuntu elements, such as overlay scrollbars, theme colours, and Unity quicklists. Gwoffice is also HUD compatible thanks to its use of the App Menu.

GwOffice is in active development and should not be considered stable.

To install it in Ubuntu add the following PPA to your Software Sources:

Don’t want to add buggy software? No worries. GWoffice, like all successful applicants to the Ubuntu App Showdown, will be added to the Ubuntu Software Center next week.

For more on the Ubuntu App  Showdown hit up our Appshowdown tag.

Bertrand If you don't see the percentage, you don't know, hence…
GNOME 42 is Getting Redesigned Volume/Brightness Pop Ups

OstroLk Windows appears to give "inspiration" since 3 decades... :) Or,…
GNOME 42 is Getting Redesigned Volume/Brightness Pop Ups

Francesco Corriga sure... keep your broken piece of 💩 and keep dreaming.…
How I Enabled a Cool Transparent Blur Effect on Ubuntu 21.10