Want to know of a movie is worth watching? A new scope for Ubuntu’s Unity Dash aims to make finding the answer to that question super easy.

Although I’m not especially interested or beholden to movie reviews in general I do like to see, every now and then, how the critical and audience reception of a film I like compares against my own opinion. (For what it’s worth I love some pretty bad movies – Masters of the Universe being a case in point.)

So I was pretty interested to try out the following newly-developed Movie Review scope for Unity that lets one quickly find out the general opinion towards pretty much any film ever made straight from the Unity Dash. 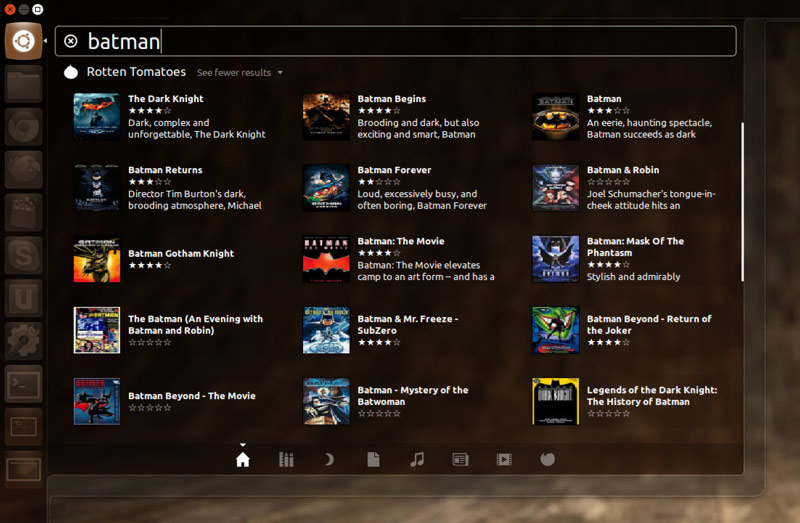 The scope uses the ‘Rotten tomatoes’ website as the basis for its data.

Rotten Tomatoes is one of the webs leading movie review sites and is famous overall for delivering a ‘fresh’ or ‘rotten’ rating based on the opinion of leading and professional movie critics.

Oddly, for a scope built around data from Rotten Tomatoes, search results do not display the ‘freshness rating’ for which the site is famed. Instead it offers up the average star rating based on user-submitted reviews.

For the most part user-submitted ratings tend to be more favourable to a film than the ‘critical aggregate’. Largely because if someone is taking the time out to rate a film they’ve seen it’s more than likely that it left a good impression.

Does this matter? Not really.

My favourite film of all time – The Science of Sleep – boasts a 70% Freshness rating based on professional reviews, with its star rating coming out at average of 6.6/10. The user-submitted ratings give the quirky French comedy a more generous 81% ‘Fresh’ rating, with an average of 3.8/5 stars awarded.

One thing that struck me when playing with this lens is how useful it could become if/when additional ‘movie store’ sources are added to Unity’s default Video Lens.

You could go from hunting down a decent movie to watch in one lens (especially if it added genre and rating filters) to finding and opening it in another.

It’s early days for this scope so you won’t find it in the Ubuntu Software Center just yet.

But it can be installed, along with the ‘Utilities Lens’ is needs so that it can display data in the Dash, from the Scope Packagers PPA.

The PPA be added by entering the following command in a new Terminal window, or by manually adding the part in bold to your Software Sources.

After adding the PPA you can install the Scope and Lens by running: –

Once everything has finished you only need to log out and back in again before the Scope is fully enabled and working.

If you give the lens a try be sure to leave your critical opinion of how ‘fresh’ or ‘rotten’ it is in the comment space below.
News lenses rotten tomatoes scopes Unity