With the release date of Ubuntu 12.04 looming ever closer it’s becoming clear not everything wished for inclusion will make it into the final release.

One such feature is a simple and easily accessible switch for turning off Ubuntu’s much-derided App Menu (aka ‘Global Menu’). This option appeared in early specification designs for the ‘new look’ Appearance settings pane – as we noted back in January. 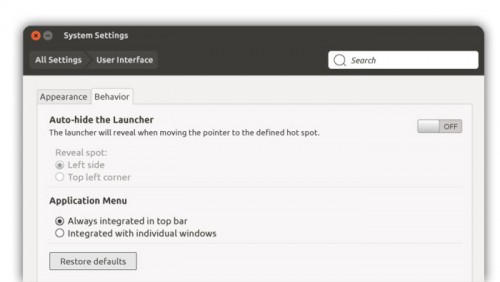 With Ubuntu’s Feature and User Interface freezes now past for Precise – and most importantly in this instance no actual code for the feature – it won’t be featuring in Ubuntu 12.04.

At least not officially.

There are already a number of ways to disable the ‘Global Menu’ in Ubuntu, the most ‘well known’ of which is simply to remove the ‘App Menu’ package from your system