Ubuntu TV captured the attention and imaginations of the technology press after its reveal at CES 2012.

The demo of Ubuntu TV shown off at the event proved that not only are Canonical serious about a multi-device future for Ubuntu and its Unity interface, but also have the engineering and design expertise to pull it off.

Talking of Engineers, were fortunate enough to land some talk time late last week with Will Cooke, the Engineering Manager in Canonical’s Product Strategy team.

In the interview below Will tells us about how he came to be working on (arguably) the hottest project in open-source; his own TV viewing habits, what needs to happen before we can expect to see Ubuntu TVs on the shelves of our local walmart, and just how you can get off the couch and get involved in shaping ‘the ultimate simple TV experience.’

Who are you and what do you do at Canonical?

I’m Will and I’m an Engineering Manager in the Product Strategy team. I’m a relatively new addition to the team, having joined just before UDS ‘P’ last October.

I came to Canonical with a pretty varied history in IT and Linux. Like a lot of British geeks my age, I first got interested in computers when the BBC started their Computer Literacy Project while I was at school (yes, I am very excited about Raspberry Pi). I was lucky enough to get my very own Electron and spent far too much time writing programs.

At university I finally traded in my RISC PC for a no-name beige box where I installed Red Hat and then progressed through Slackware, SUSE and Debian before finding Ubuntu, which seemed to like me as much as I liked it.

‘Ubuntu seemed to like me as much as I liked it’

In 2002 Freeview launched in the UK. The digital terrestrial TV broadcast system (DVB-T) promised more channels and, more importantly, a chance to play with some new toys. I bought a DVB-T card on spec and plugged it in. Unsurprisingly it didn’t work, and so began my love affair with Linux TV. At this time Linux TV and MythTV’s DVB support was in its infancy so I spent a lot of time running trunk code and trying to help find bugs. Now my MythTV system runs four tuners on DVB-T & DVB-S2 over two backends, feeding three frontends and a couple of UPnP clients on phones. It’s rock solid and I don’t know how my family would cope without it.

It’s this love of ‘smart’ TVs which made me really want to get involved in the Ubuntu TV project.

?The idea and discussion of Ubuntu across different devices and form factors was introduced by Mark Shuttleworth at UDS in Orlando. What excites you about the idea of Ubuntu on a TV?

I love watching the telly.

For me flopping down in front of the box at the end of the day is like a reward. I discharge all my responsibilities for a few hours and let it just wash over me. I don’t have to think unless I want to. In TV land things happen to other people and all I have to do is observe, and in some case, judge.

In order to achieve my nirvana of relaxation I have to put in considerable effort. First I have to find something to watch amongst the 500 or so channels available to me. I need to plan my evening’s viewing by plotting a careful course through the icebergs of repeats, things I plain don’t like, and horror of horrors, two things that I want to watch on at the same time. Then, there’s always that niggling little feeling in the back of my mind, “There must be something better than this on…” which compels me to start looking at the TV guide, just in case. And even then, after meticulously planning my evening’s viewing I still get bored and look at Twitter on my phone. 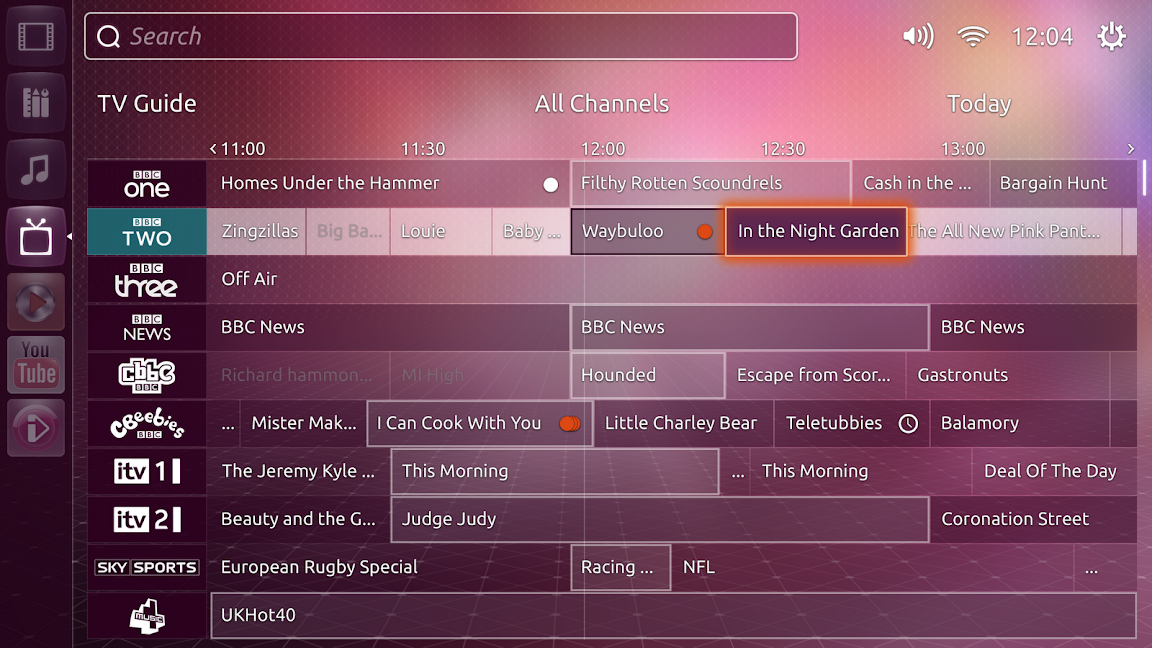 I don’t think that this is an annoyance that is unique to me. I believe that, to a certain extent, this affects everyone, and isn’t necessarily a new problem. On the 25th March 1925 John Logie Baird began a three week public demonstration of Television at Selfridges department store in London. On the 26th March 1925 the shop staff complained that they’d already seen it, and “wasn’t there anything else to watch?” *This probably didn’t happen.

I also think that as things move on, this problem is getting worse – not better. We’ve seen commercial products such as Tivo and Sky+ and Open Source projects like MythTV and XBMC change the TV landscape, but I’m confident that we can bring Ubuntu’s values of Freedom, Precision, Reliability and Collaboration to make a real impact and bring us the ultimate simple TV experience.

We’ve already seen some great insights in to these problems on the Ubuntu TV mailing list and I’m certain that as the project progresses we will see some really revolutionary ideas coming through.

But what really excites me is knowing that it will be built on an Open Source platform, allowing anybody to adapt and extend Ubuntu to create new ways of interacting with the TV and extending the functionality in ways that suits them.

What progress has been made so far in the community around Ubuntu on a TV?

The community response has been amazing. I think people really “get” the idea of Ubuntu on different devices and are eager to get stuck in to making it a reality.

We’ve seen a lot of design ideas which we reviewed with great interest while we were polishing the Unity interface for Ubuntu TV. The IRC channel and mailing list have also seen a lot of work being done with feature lists and potential problems already being highlighted. We’re very lucky to have such an organised and knowledgeable group forming.

?I think the next couple of months will see more ideas coming through as we can provide a bit more direction. We’ve been concentrating our efforts on the LTS release of course, and community feedback has suffered as a result. We’re aware of the problem and are doing what we can do suggest some areas for focus a clear route forward.

What kind of things can the community do to participate in this?

There are some aspects of Ubuntu TV that are going to be more difficult for community participation than others. This is not because we’re being deliberately secretive. There are commercial decisions that need to be made at a business level which could affect the ways in which we partner with manufacturers. Aspects of the Design & hardware specification are good examples of the sort of decisions we will need to make in-house.

But, there are more ways in which the community can get involved and build on top of the Ubuntu TV. Now we have a better idea of what it will look like and the underlying technologies involved we can start to give some direction to guide community participation.

I think that Jono’s “Experience Teams” idea is a very smart way to quickly identify common goals and form a structured team. I would suggest that people form experience teams around, in the first instance, some specific Lenses and Apps.

TV lenses have special UI design requirements which will need some careful consideration but people can build and test them in Unity on the desktop without having to install the full Ubuntu TV experience.

Once we have done more investigation on the functional specifications we will identify more experiences for the community to get involved with if they wish. Of course, that isn’t going to happen over night.

You mention that the community could build an Ubuntu on TV project, but are Canonical investing in bringing Ubuntu to TVs?

During CES we demonstrated what we have been working on recently.

At UDS in October 2011 we explored if the Unity interface can work on the TV form factor, and as far as I’m concerned we’ve proven that. Not only does it work it also looks beautiful. Where we go from here is still under investigation. There will be commercial agreements and business decisions to arrange first, but Canonical have demonstrated a clear commitment to new form factors.

We’ve been recruiting the best developers and designers to expand our teams, we’ve got some incredible ideas, and we’re going to be building awesome things. There will always be room for community contribution in everything Canonical does. 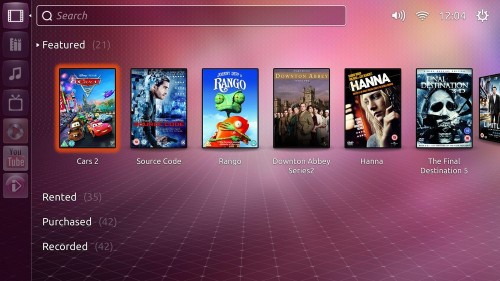 From a technology perspective, there are already many TV solutions out there such as MythTV and XBMC – is Ubuntu on TV re-inventing the wheel?

MythTV and XBMC, amongst others, are very mature projects which have had untold hours of work put in to them, and we’d be daft to try and replicate what they already do so well. The designs behind the Ubuntu TV experience are all about simplicity. The Ubuntu TV is for human beings, and we need to be mindful of that.

What we’re aiming for is the ultimate in usable interfaces, making the TV simple again and bringing back the lean-back experience.

We’re going to need, for example, a robust UPnP library amongst a myriad of other features, so I’m sure we will find plenty of opportunities to collaborate with other Open Source projects.

Have you talked to the MythTV project about this?

We spoke to MythTV very early on in the project to make sure that there were no misunderstandings, and to explain that we’re not out to eat anyone’s lunch. MythTV understand that we’re working in different arenas, but I hope there will be a chance to work with them for mutual benefit.

If all of this bears fruit, when will we be able to buy a TV with Ubuntu pre-installed?

Canonical have a great relationship with OEMs and our teams have prodigious experience in working with equipment and device manufactures throughout the world to build very successful Ubuntu based products. I hope we’ll be seeing an Ubuntu TV soon.

I’ll be sure to keep you updated. In the meantime though I would urge interested community members to join the Ubuntu TV mailing list and the IRC channel #ubuntu-tv on Freenode. There you’ll be able to keep up to date with all the goings on and contribute your thoughts and ideas.

Thanks to Will Cooke and Jono Bacon