IRC Clients are hardly the most glamourous of applications but for many of they they’re an important tool of daily life.

Smuxi, my personal favourite IRC client, has a new release available. It adds a number of new features that make it capable of pleasing the most ardent of IRC users. 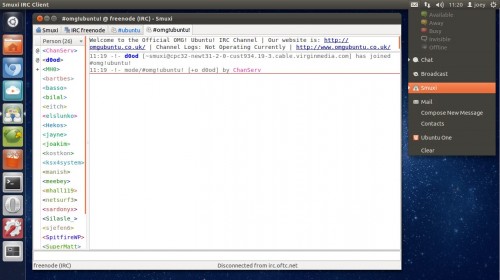 56 bug reports and 33 feature requests have been dealt with in the latest version of Smuxi.

Initial support for Jabber/XMPP support has been added. This will allow you to chat to your Facebook and gTalk without needing to open a separate app. Smuxi devs wish to note that ‘the implementation is far from complete’, lacks a buddy list (!) and should be considered a ‘technical preview of what will be coming in future Smuxi releases’.

A short video of this feature action can be viewed on the Smuxi website.

An option to enable ‘persistent message buffers‘ – whereby all channel and chat messages, including personal messages, is saved to a database and automatically displayed in Smuxi itself – can be turned on via File > Preferences > Interface. Here, change “Persistency Type” from “Volatile” to “Persistent”.

Other notable new features in Smuxi 0.8.9 including extending keyboard bindings for switching tabs; support for the IPv6 protocol; NetworkManager support for hassle-free detection of network changes; and a user-friendly way of finding group chats/channels.

Multi-platform fans will appreciate the addition of a Mac OS X build.

Smuxi boasts a wealth of personalisation options. Want chat tabs on the right? Prefer using bash style completion? Want to be notified anytime someone in a channel mentions Llamas? Smuxi can do it.

Ubuntu integration (messaging menu, notifications, etc) is included in the app out of the box.

A Daily PPA is available for anyone interested in getting the latest features (and latest bugs).

Ubuntu 12.04 Lets You Disable ‘Apps for Download’ in Unity
Read Next