Like the classic hit song constantly remade to stay modern, fans of the traditional GNOME desktop are keen to keep their preferred desktop layout fresh and available to new audiences.

And so was born the Cinnamon desktop session. 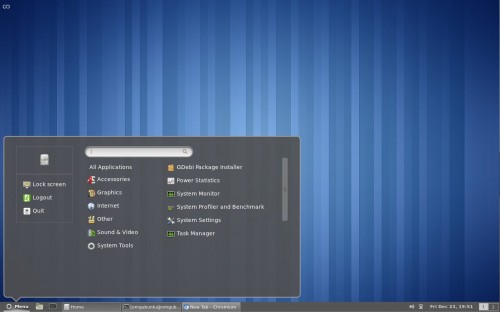 Unlike the similarly positioned ‘Mate’ desktop, which is a fork of GNOME 2, Cinnamon remakes the basic layout of the ‘traditional’ GNOME desktop using the latest technologies forked from GNOME Shell.

The developers say of the project: –

“The emphasis is put on making users feel at home and providing them with an easy to use and comfortable desktop experience.”

Although the project is within the early stages of development it is usable, although I did experience visual glitches when using the menu and artefacts were often left behind when minimising windows.

.Deb files for the easy installation of Cinnamon on Ubuntu 11.10 can be downloaded @ github.com/linuxmint/Cinnamon/downloads

An unofficial third-party PPA, maintained by Launchpad user merlwiz79, which containing the latest builds of Cinnamon is available for Ubuntu 11.10 users.

To make use of it open a new Terminal window and enter the following two commands carefully: –

Once installation has finished you can then logout and select ‘Cinnamon‘ from the session menu (the ‘cog’ icon in LightDM) to enter the Cinnamon desktop.

Thanks to Will M.