The creator of flash-free desktop YouTube application ‘Minutube’ and stylish music player ‘MiniTunes’ has announced the release of a new application: MusicTube.

Musictube is a mish-mash of the developers former two applications, and is designed to let you find, arrange and listen to whatever music you like – as long as it’s on YouTube.

The idea is similar to on-demand music streaming services such as Spotify and Pandora: you search for an artist or a track and, if it’s there, you can play it.

The ‘big sell’ of MusicTube has to be its interface and its features.

The “music player” aspect of the app is well catered for, with most ‘music player’ features one would expect integrated in to the app. This includes browsing by artists and album, displaying of album covers, easily editable playlists, shuffle/repeat options, lyrics, and more.

Searching is easy. One just needs to enter an artist, album title or track and MusicTube collates results into something easily navigable. 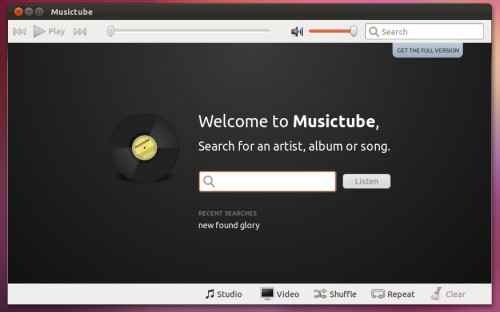 For example, a quick search for the band Anti-Flag threw up the following bunch of well organised results, with most of their albums and singles auto-collated and presented neatly. 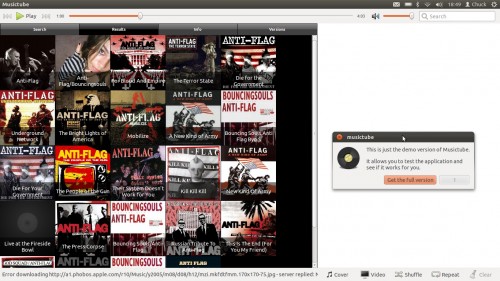 One of the really, really neat features in MusicTube is the ability to switch between various versions of the same songs in your playlist.

For example if I had added New Found Glory’s self-titled debut to my playlist the ‘Studio’ version of the tracks – as in the versions I’d hear on the album – would play. 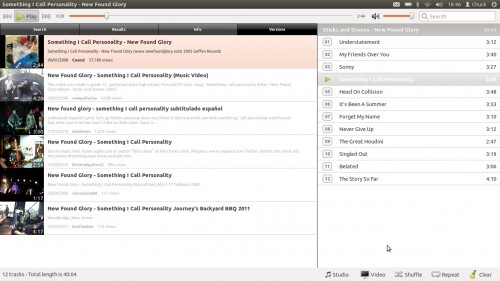 If I switched to ‘Cover’ mode MuiscTube would seek out and play back cover versions and/or remixes of as many of the tracks as it could find. 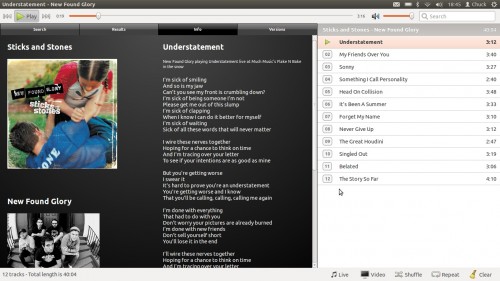 MusicTube is not free. A full version of the application will set you back $9.00.

A 32bit .deb is available to download for evaluation (it has a nag screen) @ flavio.tordini.org/musictube

There is now indication on whether or not Musictube will be made available in the Ubuntu Software Centre – here’s hoping!