QR Codes are nifty time-saving shortcuts: sort of hyperlinks that can be put in the real world for anyone to follow.

Qrencode is a small command-line utitlity that allows you to create your own QR codes (saved as .png image file) for whatever you like – a blog, a secret message – whatever!

What is a QR code?

A ‘QR’ (short for Quick Response) code is a so-called ‘two-dimensional barcode’ made up of black squares on a white background. Information encoded in QR Codes typically contains URLs or text and are in wide use thanks to Android and Blackberry mobile phones making use of the technology.

How can I create a QR code in Linux?

The creation of QR codes in Ubuntu is simple. You will need to install ‘qrencode‘ from the Ubuntu Software Center – you can click here to install it or search for ‘qrencode’ manually.

Once Qrencode has been successfully installed you can create QR codes using the command line or a new graphical application (see this post for that).

To approach it using the Terminal pay heed to the following command structure: –

To create a link to the Google homepage with the output file called ‘google.png’ and made in your homefolder  you would run: –

This outputs the following: –

Too small? You can make the ‘pixels’ used in the code bigger by using the ‘-s‘ argument. Let’s make the same QR code but with the square pixels increased to 6×6 and have the .png saved to our desktop- 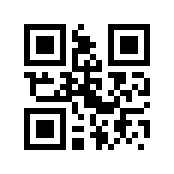 Apps How To qrcodes qrencode tips