I know, I know. You’re rolling your eyes at the mention of the words ‘Nano’, ‘Apple’ and ‘iPod’ in the same sentence.

But as someone once sang ‘give peace a chance’ here I am singing ‘give iPod Nano inspired CoverGloobus themes a chance’ – particularly when they’re as nice as this.

Regardless of this theme being inspired by a boo-hiss Apple product it’s a good looking and thoroughly well made covergloobus theme, one that would do well to ship by default.

Player controls show up on mouse hover . They are lined up in traditional form (previous, play/pause, next) so there’s nothing unconventional to remember. 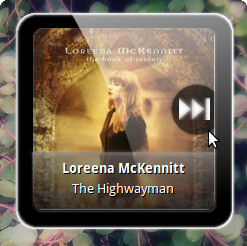 Sadly overly long track names do not take advantage of ‘scrolling’ support – as we’ve seen in other CoverGloobus themes of late – nor does the application ‘scale’ to larger or smaller sizes particularly well. At stock size it is the business, however. So get over the boo-hiss and give it a try.