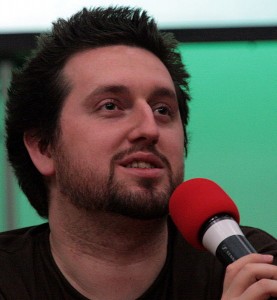 Yesterday I got a chance to sit down for an interview over lunch with one of the original founders of Ubuntu: ex-GNOME Release Manager and former Canonical employee Jeff Waugh.

Jeff (aka. jdub) is a very active Australian Open Source developer who has been deeply involved in projects such as GNOME, Ubuntu, and the Australian free software community.

When Mark Shuttleworth began the process of building Ubuntu in 2004 Jeff joined Canonical as the third employee, behind Robert Collins and Dave Miller.

He stayed with Canonical for just over two years working in business development and was instrumental in many original decisions that still affect us Ubuntu users today.

Since then, Jeff has founded Waugh Partners with his wife Pia Waugh, who’s also very active in Open Source.

The beginnings of Canonical and Ubuntu

Jeff and I roamed down into Kelvin Grove’s village, about 600 metres from the linux.conf.au conference venue, for lunch on Tuesday.

We found a mexican burger/pizza place and sat down outside in the beautiful Brisbane weather for a bit of a chat over lunch.

Starting at a logical place, I asked Jeff how he met Mark Shuttleworth and how he got started with Canonical.

Jeff tells me a story from 2004 when Robert Collins tried to convince him that he really should meet "this guy who you really need to meet" in Sydney.

At that stage, Jeff was working for an ISP that was going "down the tubes." He had just finished lunch with other colleagues where he had to share the bad news, and when Robert contacted him urging him to meet this "mystery man," he used the following lure:

Have you ever met anyone who’s been to space?

After explaining how Jeff met Mark, he went on to explain how Mark chose the original people to pick for Canonical to build Ubuntu in 2004 and 2005, an interesting story in itself. 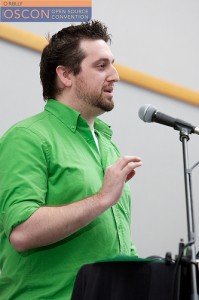 Being the GNOME Release Manager, Mark was very interested in Jeff as Mark wanted to use GNOME as the desktop environment for what was to become Ubuntu (at that stage, the project was simply "No Name Yet").

Jeff explained to me that when Mark was planning this idea, he trawled through 6 months of Debian mailing list emails picking out the appropriate people for the company which was to become Canonical. Mark had done his homework.

[Mark had] a very astute understanding of the marketplace.

Jeff continued talking about the foundations of Ubuntu and Canonical and how Mark had his mind made up in 2004 about some particular aspects of Ubuntu that are still around today: the desktop environment (GNOME), the release cycle (6 months) and the fact that free CDs would be shipped worldwide.

Mark said to Rob and I, if you could have anyone working on this mission from Debian, who would you pick?

Jeff talked about some of the original meetings of Canonical in Mark’s two bedroom London apartment, with around 20 of the best people in the industry, which apparently made quite an impression.

In the Debian context, the smartest guys in the room… there’s the dpkg maintainer, the apt maintainer, the head of Debian security and you’re just like holy crap, this is amazing.

So where did the name "Ubuntu" come from?

Jeff explained to me how Mark came up with the name "Ubuntu" and how he was embarrassed to share this idea with others at first.

As most should know, Mark is South African and Ubuntu is a word originating from the Bantu language in Africa.

Interestingly, after Mark shared the idea of "Ubuntu," there was then a bit of discussion as to whether the company would be called Ubuntu, or the product, or even the product called Canonical.

They all decided the product had to be called Ubuntu.

Jeff also explained how the animal codename system started: The original mailing list for Canonical was called the "Warthogs" and hence the first version was the Warty Warthog.

At the same time as all of this was going on, the team at Canonical were trying to keep a lot on the down low until they had some solid stuff to announce to the rest of the community.

Although, they did register nonameyet.com to hopefully inform the industry where all their top hackers had disappeared to!

It was the Super Secret Debian Startup.

We talked about the six month release cycle, upgrades, what it means to enterprises and consumers and even Jeff’s mother-in-law.

While the six month release cycle is great for syncing with upstream and also for keeping enthusiasm and motivation prevalent within Canonical and the community, one has to wonder whether mainstream end-users actually want to upgrade their OS every 6 months or not.

Jeff said that he found out his mother-in-law had been doing distribution upgrades on her own for some time – something which I found very surprising, as my Mum certainly doesn’t do that! 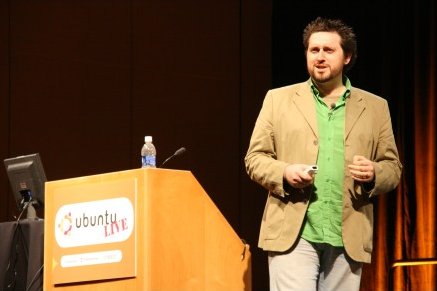 We also discussed rolling releases and post-install application upgrades as well as whether Canonical should explore developing things in the background and then only landing it when said thing is actually completed and ready.

Prime example: The Software Center that only launched with one paid app available for purchase in Maverick 10.10.

On Unity and GNOME Shell

Jeff and I talked about Ubuntu’s new Unity interface, the implications of it being on the desktop, how good the original netbook interface was and what this means for upstream and the whole Linux community.

Jeff is quite against Canonical doing their own thing, reasoning that splitting away from upstream can cause a heap of issues with maintainability and rifts within the Open Source community.

When you go off on your own, you have to do crazy shit.

We had a good conversation about how Canonical and GNOME appear to be distancing themselves more and more and what this means for both ends of the spectrum.

Jeff suggests that a reason Canonical does a lot of their custom work (indicators, window controls, Unity, etc) is simply to differentiate themselves from glut of competing Linux distributions, something which he says isn’t necessary as Ubuntu is already popular for other reasons.

[Canonical] don’t need to be so focused on differentiation. They’re already known for stability, reliability and ease of use.

Jeff shared with me an interesting opinion on how Canonical have justified Unity and not using GNOME Shell, and how the company has handled this when the community questioned it.

I am deeply unimpressed with the amount of FUD and bullshit that Canonical people who are otherwise sensible people like Jono and Mark have said about that whole decision making process.

Is Canonical still focused on the desktop?

With many efforts being focused on enterprise deployments of Ubuntu, an uptake in development on the Landscape system management service, more job listings in enterprise departments and a paid support program, one has to wonder whether Canonical is still focused on ‘fixing bug #1.‘

We talked about whether Canonical is still focused on their original goal from 2004 or whether their priorities have distinctly shifted to the enterprise side of the industry.

Has Canonical given up on conquering the mainstream market and are now focusing on enterprise deployments, or are they simply focusing efforts there in the meantime to build up cash for bug #1?

Canonical may be realizing now that stealing market share off Windows might be more effort than required, and perhaps they’ve found an excellent source of income from enterprise deployments and of course support contracts.

The talk moved on to the benefit of Live CDs and how they helped to spread Ubuntu around in the early days, but whether they are still relevant now that after 6 months, your shiny new CD is irrelevant, and often (with long shipping times) the new version of Ubuntu will be released before you even receive a CD for the last one.

As for moving to a DVD?

The benefit of not moving to a DVD is that Ubuntu tries to not become bloated, like Windows and this leads to a lot of neat and creative space saving on the CD, as well as optimized code and hence a generally slimmer, cleaner experience.

[The 700mb CD] is a nice creative limitation.

The talk finished with a quick chat about Wayland and X (where Jeff emphasized that Wayland is a long, long way off), and then after a whopping 40 minutes of chatting, Jeff finally got to eat his lunch! 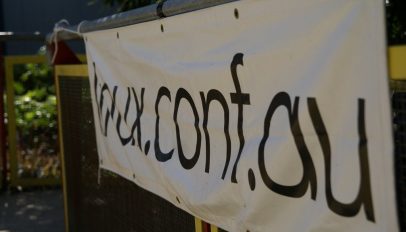