I’ll ‘fess up before we begin: I adore Indicator-Workspaces. So much so that I was very excited when its ace developer George Dumitrescu dropped by my inbox to inform me of a few recent changes he has made to the app. 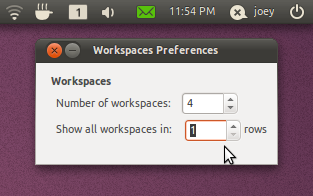 Better yet Maverick users are now able to install the tool from a PPA (having previously had to install a Lucid .deb).

If you’re a fan of the tool and want to stay auto-updated with the latest releases add the following PPA to your software sources.

Many users find adding PPA’s via the Terminal the fastest method. it’s not scary – Move your mouse to Applications > Accessories > Terminal and enter the following two lines carefully: –

As great as these features are – what’s next for the minuscule tool? George dropped me a few hints including an option to re-name workspaces from the preferences window and an option to auto-start the applet at login.

The former of these will, I suspect, prove very popular amongst users.