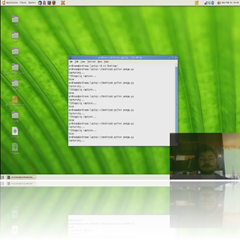 Pongo is a small, free screen recording utility that merges video of your desktop, your webcam and sound from your microphone together, out putting it into one single .ogv file ready to edit, adjust or upload to the world wide web.

The app, whilst primarily intended for use in usability testing, doubles up as a great tool for screencasters and developers, allowing them to appear ‘in’ screen to talk through their actions on screen.

Pongo was initially developed by Andreas Nilsson but development has long since stalled. Step up Jan-Christoph Borchardt who is continuing the excellent potential Pongo possesses over on Launchpad.

Tip: Double it up with Screenkey & display key-presses on screen too!

Although Pongo lacks a GUI of any discernable sorts the Pongo team have made it fully configurable from the terminal.

Borchardt, when mailing us about the continuation of the Pongo project, noted that they are “…currently also searching for developers that are interested in helping out making the app easier to use itself.”

Pongo would definitely benefit from a GUI of sorts. In the ‘planned features’ list on the Pongo page they mention ‘something similar to [Mac OS X app] Silverback‘. This would be a smart move and nothing short of what Pongo deserves.

At a loose end or two? Why not muck in – Head over to launchpad.net/pongo

Thanks to Jan-Christoph Borchardt