IRC Clients are one category of application that hasn’t evolved much over the last few years.

Sure, some now let you announce ‘Now Playing’ info from Rhythmbox in channels and others give you bubble-tastic notifications but, interface wise, they still resemble little more than a terminal session with a thick window border.

Smuxi doesn’t deviate from this mould, not least because it cites the command-line IRISSI IRC client as its inspiration.

But Smuxi has more than a handful of ace features up it’s sleeve that would make it an ideal consideration if you’re looking to switch IRC clients. 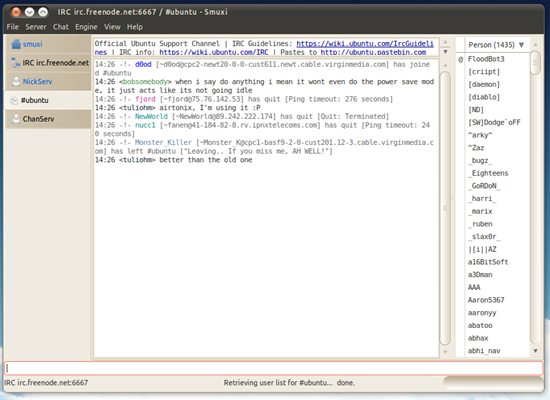 First off the UI: I love the way tabs are handled in Smuxi, via the use of a left-hand side pane. This feels much more natural and makes spotting an IRC channel in need of attention much more noticeable: rather than blinking away at the top of the client where you’re not likely looking it’s on the side of the conversation instead. Smart move.

For customizers Smuxi is verily much configurable; as well as settings for basic items such a fonts, colours, background images and tab colours you can also choose the position of the userlist and configure the tray icon.

Yes. It’s lost on me too, but Smuxi has inbuilt support for Twitter, supporting: –

SpiderOak Online Storage service is secure, speedy & simple to use
Read Next