Everyone loves music players and we’ve certainly had a lot of feature of late – The google looking MiniTunes, ‘ghost of Amarok 1.4′ Clementine & the stylish Banshee-Meego. Pragha is ‘yet another music player’ that’s been kicking around for a while now and, I thought, time for a bit of a mention here on el OMG!…

Pragha music player was designed from the ground up to be both light and feature complete – a claim it most certainly lives up to. The lightweight GTK+ music player is derived from the now-defunct Consonance media player.

Whilst Pragha it’s not a player you’ve probably heard of before it is certainly one that deserve a once over if you’re a fan of Amarok-style tree-browsing. 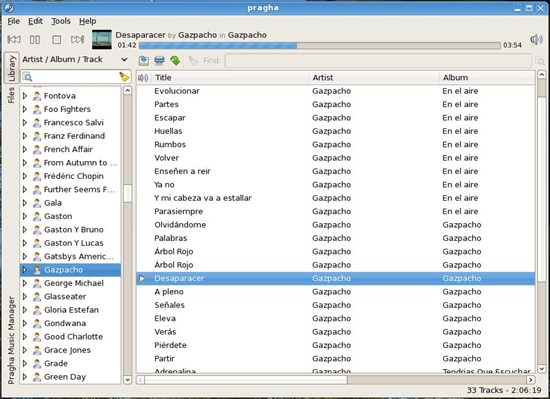 No music player is worth it’s salt if it’s lacking in the features department, so what does Pragha offer? Quite a bit…

There is no cross-fading, gapless playback or ReplayGain support. Not deal breakers for some, but likely vital omissions for others.

Ubuntu 10.04 users can find the most recently-release version in handy .deb files thanks to Ferramosca Roberto’s PPA: –

Home » Apps » Pragha Media player is both fast and familiar