Whether you’re hosting a party with Rhythmbox providing the boom box duties or sat on your bed reading the latest Farscape comic and wanting to chill out with some ambiance the following fullscreen addon for Rhythmbox is just what you need.

This plug-in displays ‘album art and minimalistic info about what’s playing and what’s next‘. It comes with the following features: – 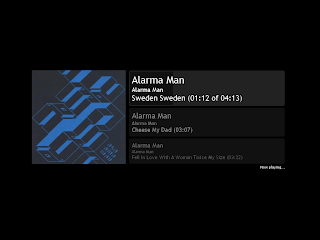 Installing the plug-in is a bit of a faff. Ideally you should check out the latest source using subversion: –

However you can also download a .tar.gz with the latest snapshot in if you just want to try it out: –

Once download you need to place the (extracted) ‘rhythmbox-fullscreen-plugin-read-only’ folder into your Rhythmbox plug-ins directory. The easiest way to do this is via the terminal.

In newer versions of Rhythmbox (wink, wink Meerkat-ers) you’ll need to put the plug-in in: –

Once installed the plug-in activate the plug-in via the plug-ins menu and enable via the ‘fullscreen’ button that will appear in your main toolbar.