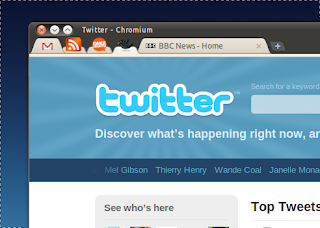 If you’re chomping at the bit to try out some of Googles Web App features in Chrome/ium then read on!

Google announced that a new Chrome Web Store was being built earlier this year at their annual Google I/O conference.

Whilst the launch of the store itself is due later this year, progress on enabling support for Web Applications in the browser is apace.

Try it out
You can try out a handful of “web apps” (and i use the term loosely here) in the Chrome Dev channel or one of the Chromium daily builds. If you’re running one of those, and want to see what the fuss is all about, create a new launcher with the following command or run it from a terminal: –

Or for Google Chrome Dev channel: –

Get some WebApps
Whilst Google ship Chrome and Chromium with some example webapps these will be removed in a few short days. Thankfully Lee over at DownloadSquad has put these up for download on the site and created many, many others to boot – props!

Because of the need for WebApps to be installed from a local source at present you need to endure you do the following: –

Webapps can be now launched from the ‘app bar’ now floating on top of the ‘new tab’ page.

You’ll notice a visual difference in ‘Web app tabs’ for they don’t show the navigation bar by default (but this can be enabled by right clicking on the tab > show navigation bar). App tabs also show a fancy-pants .png icon instead of a traditional page title.
As with normal tabs App Tabs can be pinned so they show on every launch. It might not be wise to pin GMail or Facebook unless you know your computer isn’t likely to be used by anyone else.
A wider selection of WebApps, including ones available to request advanced HTML5 permissions such as offline storage, will be available to install from Google’s forthcoming WebApp store later this year.
Article originally appeared on omgubuntu.co.uk
chrome chromewebapps