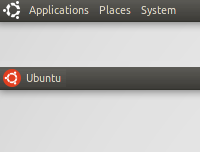 Bored of your regular applications menu? Swap it out with Cardápio- a panel applet menu replacement with plenty of features up its sleeve.

It allows full access to all of your installed applications and system options  via a more traditional and compact menu approach. Add into that the ability to quickly search for items and it soon becomes a worthy contender to the status quo.

Cardapio has many features, not least of which being able to assign a key combination to call it, then start typing and hit return to launch the first result; it feels like Gnome-Do panel bound!

Aside from being able to search applications Cardapio can also search & launch system menu entries and folder. Providing you have tracker installed it can also make use of your tracker database for finding photos, text, music and other files and folders, which is pretty nifty.

Many readers may see parallels between Carapido & other menu alternatives such as GnoMenu & the various ‘slab’ implementations. Cardapio doesn’t feel as ill-integrated as GnoMenu nor as laggy and it certainly is more responsive than some of the ‘slab’ applets I’ve tried in Ubuntu over the last few years.

That’s not to say it isn’t without any drawbacks – any application that deviates form the norm is going to feel different for starters, instantly putting it at a disadvantage with most users who are accustomed to a certain responsiveness & click-flow. Many of Cardapio’s issues are more to do with it’s youthful development stage rather than inherent flaws.

Install
Like the look of it? Want to try it out? It’s easy. Open up a terminal (Applications > Accessories > Terminal) and enter the following line carefully, hitting return after each and entering your password were prompted.

Proceed to add Cardapio to the panel by right-clicking some empty space, selecting “Add to panel”, and choosing “Cardapio”.

Not just an applet
Cardápio can also be ran as a standalone launcher that can be called via a key combination (default is Super+Space). To run it as a standalone application run : –

How to enable Menu icon
By default Cardapio lacks a menu icon. This is because of Gnome’s default icons-in-menu setting being turned off. To get the icon in the panel you’ll also have to switch on ‘icons in menu’s via the gnome configuration editor.

How to change the calling combination
By default Cardapio use Super+Space to invoke the menu. This can be changed to any key combination that you like via  bit of jiggery-pokery. Open up a terminal and enter the following command to edit the configuration file: –

You can also enable Log out and Shutdown buttons via the same method, just change the value of ‘Show session buttons’ to true.

Help Cardapio rock
Cardapio is already a promising application but this is just the beginning.

Some of the current ‘issues’ with the applet need fixing, so if you think you could be of use – muck in @ launchpad.net/cardapio.

Zeitgeist
How much better the ‘pinned applications’ element would be if it was drawn from Zeitgeist? You’d get an auto-generated list of your most used applications. Now that’d be ace…